BrewDog IPA is Dead and Vomir 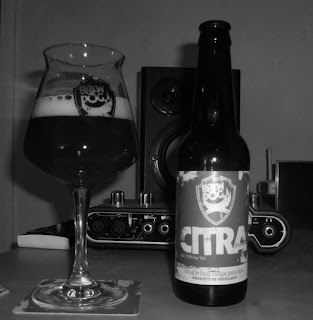 BrewDog's IPA is Dead experiment is designed to highlight the distinctive characteristics of four hops from around the globe by using them in isolation in four brews that use the same base beer. I've picked out the Citra version – a US hop that's fairly new on the scene, but increasingly popular among brewers. 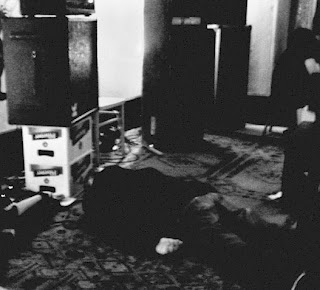 'Proanomie' by Vomir was released in 2008. It's a prime example of Harsh Noise Wall; essentially an hour and a quarter of unchanging, intense, static noise. Sounds like fun, huh? Often described as brutal and crushing, I actually find it surprisingly meditative and calming.

The idea here is that the unrelenting noise will gradually obliterate my sense of self, allowing total focus on the sensations triggered by the beer, enabling the unique characteristics of the hop to come through clearly. A deep listening and deep tasting session.

I wait till I'm approximately half an hour into 'Proanomie' before opening the beer. By this point I'm feeling very relaxed and I'm unable to recall a single thought I've had since Vomir's noise began.

The beer pours a slightly hazy amber colour and I'm hit with aromas of freshly cut grass and pine needles.

Malt elements found in the Hardcore IPA that forms its base come through as I drink, and are balanced well against the tropical fruit sweetness and orange citrus flavours showcased by the hop in the finish. I'm fairly certain after this session I will be able to identify Citra hops whenever I come across them.

I forget there's even any noise. When 'Proanomie' abruptly ends I'm shocked by the silence.

My thoughts quickly return to the beer I've just drunk: it didn't have as much concentrated hop bitterness as I was expecting, but it was immensely flavourful and certainly idiosyncratic, and I'll be seeking it out again. Or maybe I just feel this way because Vomir had temporarily deleted me from existence.
Posted by Chris at 10:56 pm No comments: