Nøgne Ø (prounounced ‘non-yay’) was founded in 2002 by two Norwegian home brewers on a mission to create ‘uncompromising’ craft ales.

Located in the small maritime town of Grimstad, around 250km south west of Oslo, the brewery makes no bones about the influence of US brewing on their beers, particularly when it comes to hops.

The beer I’ve selected for this match is a bottle of Tiger Tripel, Nøgne Ø’s take on – you’ve guessed it – a Belgian-style tripel. 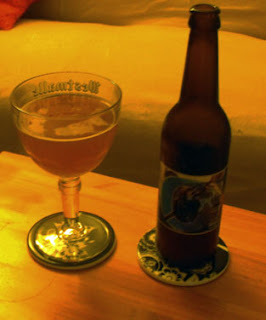 I could have chosen a style that was more Norwegian, but the shelves at my local beer shops aren’t exactly spilling over with bottles of juleøl, and I wanted something that gave a hefty nod in the direction of historic brewing traditions.

Tiger Tripel pours a murky, dark orange colour with minimal head. On the nose it’s mostly honey and orange, with a pleasing hint of banoffee pie.

Honey is a dominate taste too, alongside biscuity, cake-like malt sweetness. However, it’s not quite as sweet as I would have expected and the alcohol content (9%) comes through strongly. Any sweetness soon gives way to a dry, white wine-like finish.

Knut Hamsun was a Nobel Prize-winning Norwegian author. He wrote what is probably my favourite novel, Hunger, but that’s not the book I’ve selected for this match. 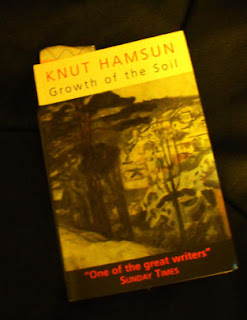 Growth of the Soil, the novel that secured Hamsun the Nobel Prize in Literature, is an epic tale of man’s struggle to cultivate the land, the link between humanity and the earth through agriculture and, to a certain extent, the modern world’s encroachment upon personal freedoms.

This is my first reading of Growth of the Soil. I’m immediately struck that the intense, Dostoevsky-esque first person narration of Hunger is replaced here by a steady, even-paced third person.

I re-read the first line as it’s a mind-blower. I take another sip of the beer.

My mind wanders briefly, and I take my eyes off the page and onto the beer. This drink is only in my hand thanks to a series of natural processes, and man’s ability to shape and guide those processes. I’ve heard brewers talking about ‘working for the yeast’, that living, dynamic organism that makes beer possible. The best brewers work with nature to create incredible beers; the worst bombard their beers with chemicals and artificial procedures to force the mass output of bland bullshit. This beer I hold now exists only because of man’s willingness to learn, through the ages, about the world we live in and the bounty the earth has to offer when treated right.

I return to my book. A truly harrowing, disturbing event takes place and the plot takes a dark turn. The beer tastes a little flat. I decide to call it a night.

Tiger Tripel is a good, but not great, beer. I don’t think I've ever drunk ‘a take’ on a Belgian ale that was really outstanding – why not just drink the real thing? But what I like about Nøgne Ø is that on the label they seem to acknowledge that this shit is hard:

“It is very difficult to brew a complex and balanced Belgian-style tripel ale, but we have made an attempt at brewing one anyway! Our respect and admiration for those who master the skill and art of brewing excellent ale of this style is limitless.”

Hamsun is one of the greatest writers of all time. Read Hunger, and then everything else he ever wrote.

Reading and drinking beer (in moderation) works. Get into it.
Posted by Chris at 1:06 am