Sharp's Monsieur Rock and Match of the Day

When I heard a whisper on the wind that Stuart Howe was brewing a beer with Orval brewmaster Jean-Marie Rock I got excited. If you saw me at the time you wouldn’t have known I was excited – I tend to keep any positive emotions buried deep beneath a façade of sneering cynicism – but I was. 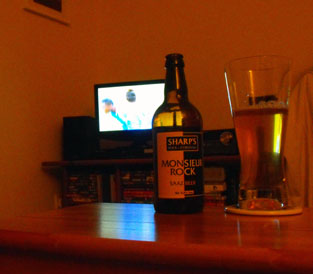 My first sample of Monsieur Rock was supplied by a good friend (the first one’s always free). I remember it being exceptional, but can’t quite recall why – we drank a lot of incredible, complex-tasting beer that night and my memory of it kind of got lost amongst the onslaught of massive flavours.

How I let this happen, I’m not sure, as Monsieur Rock is undoubtedly one of the best beers I’ve drunk over the last six months.

Shimmering gold in colour with fizzing lemon zest perfumes, it’s a thing of beauty when it hits the glass.

Biscuit malt flavours melt away to let peppery, lager-bitterness caress the back of your mouth.

Hidden in the background is a distinctive Belgian sourness that, unless you know what you’re looking for, you might not find, but it’s there alright – and it subtly shapes this beer into something dangerously desirable.

The show
I love football, but I don’t particularly follow a team (not sure I could cope with the stress); I love the complexity and subtleties of the skill, strategy and psychology involved in a way that you can only really appreciate if you have played the game, and immersed yourself in the culture and experience of the sport, from an early age. 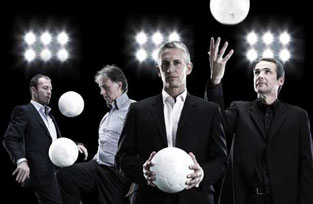 Match of the Day is my perfect television programme and the only one I really watch with any regularity.
It’s often film-length at an hour and a half plus, and the drama, action and (frankly awful) dialogue captivate me in a special way. No talking is allowed when Match of the Day is on in our house. It’s my time; pure unadulterated pleasure and unbridled joy. Pair that with an outstanding beer and you’re about to witness some serious façade-slipping.
The match
Sharp’s: an English brewery, supported by foreign investment, with legions of devoted fans. In Monsieur Rock they have a beer that matches British brewing traditions with continental flourish.
The Barclay’s Premier League: an English football competition, supported by foreign investment, with legions of devoted fans. The teams match British tactics with continental....fuck it – you can see where I’m going with this. I won't labour the point.
Basically, beer – particularly lager – is intertwined with football culture in the UK.
Unfortunately, it tends to be utterly shit 'lager' that’s sold at football grounds, sports bars and ‘Sky Sports Here!’ pubs. I am completely fed up with watching football while drinking beer-flavoured water. Luckily, in my home, I have a choice.
Really, drinking any great beer while watching something you appreciate is never going to be anything but enjoyable.
However, for me, drinking Monsieur Rock while watching Match of the Day works particularly well, because it takes my memories of drinking Foster’s out of plastic cups and stomps them into the fucking floor.
It’s cathartic and cleansing, and the refreshing characteristics of the beer augment this sense of well-being and rebirth.
I’m guessing the elation I feel when drinking an absolutely superb beer while watching my favourite programme is similar to the feeling Javier Hernández has when he scores thirty-six seconds into the crucial title-decider against Chelsea, or when Steven Flecther slots home his team’s third goal against West Brom to give Wolves some hope of staying in the Premier League.
Mick McCarthy said Fletcher had ‘ice in his veins’ when he scored his second goal of the game; I reckon if he’d had a bit of Monsieur Rock in his system he might have had a hat-trick.
Posted by Chris at 10:58 pm