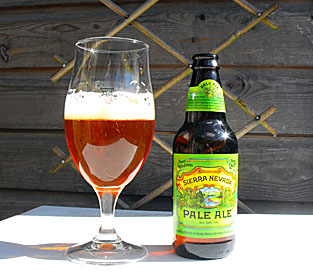 Its flavours and aromas have been written about thousands of times, and there are tasting notes out there that communicate the characteristics of this beer better than I could ever hope to.

I’ve chosen this beer for this match because it is the ultimate showcase for the Cascade hop.

Sierra Nevada use Cascade as a finishing hop in their Pale Ale, and they set it against bread-like, almost savoury, malt flavours.

The bottle-conditioned beer pours an exquisite deep amber colour, with a pure white head that hangs around till you’ve finished drinking it.

The music
There’s a collective of musicians in the Pacific Northwest that are shrouded in mystery. Centred on the ritualistic, atavistic black metal of Fauna, they have been derided by some for their ecological, spiritual and philosophical outlook...but certainly not by me.
In fact, Fauna’s albums ‘Rain’ and ‘The Hunt’ triggered something deep within me, reignited musical passions, and took me down a path that I otherwise may not have stumbled upon. They appeared in my life at just the right time, in just the right moment.
Fauna, and the bands and projects associated with them, are sometimes described as being proponents of ‘Cascadian Black Metal’. However, I would hasten to add that this appears to be a description that has been thrust upon them, rather than one they have adopted themselves.
Echtra, as far as I can tell, is a member of Fauna. He has two previous solo releases, Burn It All Away (on Faunasabbatha) and A War for Wonder (on 20 Buck Spin). All of his songs are exactly 23 minutes long. I’m not sure why. 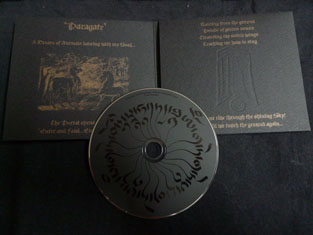 ‘Paragate’ was released by Temple of Torturous at the end of March 2011. Thanks to Hammer Smashed Sounds for drawing it to my attention; it came in totally under my radar. The idea of matching Cascade hops with Cascadian Black Metal had been on my mind recently, so when this release revealed itself to me it seemed like a good idea to use it in this experiment.
The match
I haven’t drunk it in a while, and Sierra Nevada Pale Ale doesn’t smell like I remember it smelling.
Pine aromas, rather than the citrus I had been expecting, hit my nostrils, but I’m happy; I’m instantly transported to boreal forests. This is working.
As with previous Echtra releases, acoustic guitar parts are set against black metal distortion. Vocals drift in and out. Percussion is minimal.
This music feels expansive, vast even. There’s a hint of some ancient menace in there, a dark time at the dawn of man.
The grapefruit bitterness in the beer is crisp and sharp at first, but lingers long in the mouth as I let the first of the two 23-minute Echtra movements draw to a close.
There are passages here of sheer, transcendental beauty.
Bliss. Euphoria.
Is that the alcohol, or the music? I would like to believe it’s the soothing, meditative effects of both combining to take me somewhere else.
I long for wide open spaces – forests, fields, mountains – and to escape the smog and bustle of the city.
I may be forcing it a little, but there does seem to be something extra at work here that goes beyond listening to Echtra and drinking Sierra Nevada Pale separately.
The inextricable link between beer and music is in rude health.