Full disclosure here: I picked up this bottle of Birrificio Italiano Tipopils for free at the European Beer Bloggers Conference 2011, at the end of the 'Night of Many Beers' at Camden Town Brewery, from Alessio Leone. 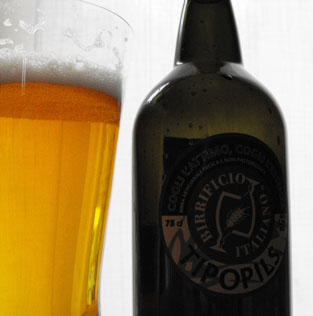 There was more free beer available to me that night than it was possible to carry, so I had to make my selections carefully. Tipopils was definitely one of the beers that stood out amongst the many I sampled that glorious night, so I ensured a bottle of it made the cut.

A hazy, straw-gold complexion contrasts against a perfect, pure-white head in the glass. Stick your nose in and you’re hit with Saaz aromas of cereal grain and understated potpourri.

I was a Sega kid.

My Master System was replaced with a Mega Drive when the time came. I never owned a NES or a SNES, and didn’t really know anyone who did growing up.

We bought a Nintendo Wii recently on a bit of a whim. The Wii is clearly not for hardcore console gamers, and is not marketed as such. It brings a social, active dimension to video gaming that, before the Wii’s launch, was an experience I reckon you could only really find in arcades.

However, there was one, more traditional, game that I knew I wanted to buy now I had turned my back on my Sega roots: New Super Mario Bros. Wii. 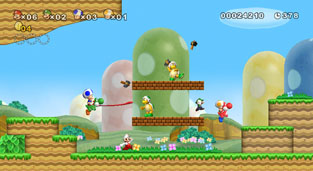 Ever since Super Mario Bros. 3 appeared in The Wizard, any games that feature Nintendo’s flagship mascot have always appealed to me, but I never got the chance to spend any time playing them. Until now, that is.

New Super Mario Bros. Wii almost seems like it could have come out in 1990 – it’s a 2D side-scrolling platformer – and though it does include a few elements the bring it up-to-date, it doesn’t really embrace or promote physical movement in the way other Wii games do.

I begin to drink my glass of Tipopils as the Wii silently comes to life.

Alongside a grainy earthiness, there’s a honey sweetness that emerges early on. Herbaceous spiciness follows, before a restrained, elegant bitterness unfurls.

New Super Mario Bros. Wii is a lot of fun, with levels and obstacles that are expertly designed, but I’m finding it a bit challenging. I keep dying. After every virtual death, I reach for my glass so I can take a moment to refocus my mind.

Tipopils, like other great pilsners, can be drunk and enjoyed without thinking too hard about it. Certainly, while I’m making Mario leap from platform to platform, I’m not concentrating fully on what I’m drinking, but there are excited thoughts buzzing away in the background that tell me this is an impressive beer. When you do dedicate some mind-space to the contemplation of Tipopils, it reveals layers of subtle, focused complexity that are a joy to behold.

I’m getting frustrated. Progress is difficult. I try to summon the precision and determination that I had has as a kid when there were no save options, when you had to play through the whole game in one sitting if you wanted to complete it.

I continue to fail with regularity. I can’t take it anymore. It’s just too hard.

I feel deflated. I would have nailed this game when I was 12. Is that it? Have I finally said goodbye to any lingering elements of my forgotten childhood?

If I have, I’m not that bothered. Kids don’t get to drink great beers like Tipopils.
Posted by Chris at 12:58 pm