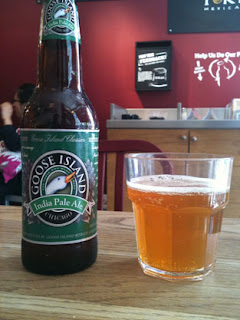 It’s fairly readily available here in the UK, and if the recent buyout of Goose Island by Anheuser-Busch increases its reach and distribution, that can only make the world a better place.

However, if they somehow conspire to screw with this perfect brew there will be hell to pay – i.e. I’ll moan a bit about it in the pub. Maybe I’ll even unleash an angry tweet or two. Take that free market capitalism!

So far, so American-style IPA. Yet the masterfully-balanced flavours in this beer ensure it stands out from the crowd.

The hops take over. There’s plenty going on here, with orange citrus flavours drifting in and out of the mix, but rather than going for the big brutal hit that some of its peers love to deploy, Goose Island IPA delivers a restrained and refreshing bitterness.

Mere words cannot do it justice, and I’ve never read a review or set of tasting notes that even come close to really describing this beer.

I think Goose Island IPA may be a victim of its own success. It’s so popular, so good and so easy to drink that no-one thinks it’s rare enough or interesting enough to devote any time to.

This is a mistake.

There’s some talk that burritos are just London’s latest food fad, destined to burn brightly before fading out when the next cool eating experience comes along.

If that’s the case – and I don’t believe it is – it’s a great excuse to cram as many burritos into my mouth as I can in as short a time as possible before my options become limited.

Tortilla was the first of the new wave of London burrito joints (not sure why they have to be called ‘joints’, but ‘restaurant’ doesn’t really cut it) that I visited. 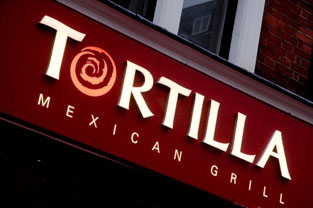 I’m not going to get into a debate about where Tortilla ranks in the London burrito hierarchy – there are blogs devoted to just that topic – but I will say this: Tortilla burritos are exceptionally tasty, always of a consistent high quality and reasonably priced.

Oh, and they undoubtedly have the best beer selection.

Throw Negra Modelo in there and that’s one hell of a line-up that even the presence of Corona and Blue Moon can’t detract from. It tells me someone at Tortilla knows what’s up beer-wise.

I’m at the Oxford Circus branch of Tortilla. I only ever come in here on Saturdays, when it’s an oasis of calm away from the overcrowded shops and swamped streets.

I get my usual large burrito with Mexican rice, pinto beans, grilled chicken, cheese, lettuce and guacamole, and a bottle of Goose Island IPA.

Okay, so the beer should be in a tulip glass rather than a tumbler, but Goose Island IPA has the flavour chops to cope, regardless of container.

Bread, meat and cheese; there’s not a lot you can do to mess that combo up. Especially when the meat in question is sublimely-grilled chicken, the cheese is grated Monterey Jack and the bread is soft, flour tortilla. Add in some perky salsa roja, and a dollop of fresh, cooling guacamole for contrast, and you’ve almost reached simple-food nirvana.

The beer cuts through the burrito flavours without destroying them, taking time to acknowledge and enhance the fierce heat and concentrated savouriness, before resetting the palate with that signature bitterness. It’s like it was designed to be drunk with burritos. With this burrito.

I’ve yet to encounter a food and beer pairing that works as well as a Tortilla burrito and Goose Island IPA. But the enjoyment of this match is not just about the food or the beer.

For somewhere that has people queuing out the door and down the street most days, you never feel hurried or harassed here. The staff are chilled out and friendly, the decor is muted and tasteful, and the lighting is subdued – Tortilla’s burrito joints are comfortable places to be.

Spend some time in one with an outstanding beer for company.