Meantime IPA is not American-style. It belongs to the same canon as the brilliant Worthington’s White Shield and the exceptional Fuller’s Bengal Lancer.

If I’m not being clear: it’s an English IPA*. 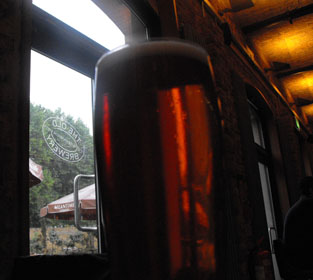 If I was English, I’d probably be draping a St George’s Cross over my shoulders right now and trying to choke back the tears – as much as I love the US take on the IPA, these beers are the real deal.

I hope they’re as close to the beers the thunderbuss-toting colonialists enjoyed as you can get; an exquisite marriage of bitter hop and sweet malt, with enough alcohol content to ensure the wedding celebrations continue long into the night.

But since I’m the wrong side of the Auld Enemy (read: plastic jock who’s lived in London for a quarter of a century), I won’t break out into God Save the Queen just yet.

At 9% ABV – compared to the 7.5% version that fills the bottles* – I believe I may have made a schoolboy error in ordering a pint. My wallet is shouting ‘dickhead’ at me.

In the glass it’s all oranges, coppers and ambers.

It’s sweeter than I remember. There’s an intense candy sweetness, almost like it’s been dry Haribo’d. However, the healthy dose of Fuggle and Goldings hops provides enough of a counterbalance to swing it away from Belgium and back to the green and pleasant land.

Greenwich is a country town that just happens to be part of one of the largest cities in the world. It’s also at the centre of time. Zero fucking hour. 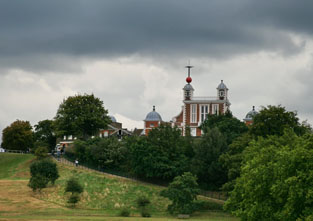 As a Londoner, it’s a haven for me. I can see the bustle of the City from the Royal Park and sneer at it with contempt. Even though deep down I know I'll be back amongst its concrete intensity soon enough.

If I ever have enough money I will live here one day. It has the perfect balance of a reasonably central position, open space, history and cultural stimulation. Oh, and some pretty decent pubs.

Greenwich’s maritime history defines it; could there be a better place – other than Burton of course – to drink an English-style IPA?

I’m at the Old Brewery. We’ve come in to shelter from an unforgiving downpour of the heaviest rain. It’s a Sunday in June. Welcome to the bleak greyness that punctuates life in the UK.

I’m soaked through and feeling a little miserable. Vibes are not the best. A decent seating arrangement is secured and we make ourselves comfortable.

My propensity to the Thames stirs something in me. A nation built on the export and import of goods across oceans. There is only one beer I can order right now.

The rain brutally lashes against the windows. It’s darker than it should be at this time of day. Aside from being in the womb, I don’t think there is any place more blissfully soothing than being inside a well-heated building while a storm obliterates the world on the other side of the glass.

I think of the journey IPA, at its inception, had to take. I’m no Pete Brown, but sitting here, dripping, and so close to a conduit for global trade, gives me a heightened appreciation of what I’m drinking.

Meantime IPA is a maritime beer. It only exists because the thirst of the Englishmen on a faraway continent made it commercially viable to create a beer that could survive an epic sea journey.


Okay, as you'll see from the comments below I was in fact drinking a different beer: Meantime Imperial Pale Ale.


In my defence, I did order a 'pint of IPA' at the bar, and when the line was behaving strangely, I was offered a bottle of the India Pale Ale as an alternative option...


I think a lot of the points in this post still stand, and at least I detected a difference between the two!


Either way, it was a great beer, and a great match. Drink Meantime. Go to Greenwich. Especially when it's raining...