By exclusive I mean it is not available anywhere else – you can only drink it at The Craft Beer Co.

In a way, that’s a shame, because this beer is brilliant. 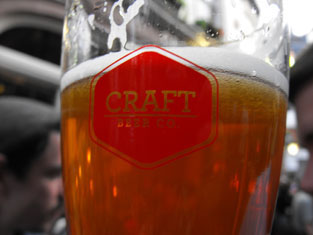 As soon as Clerkenwell Lager gets near your face you realise you should have left all notions of traditional European lager styles at the door – massive tropical fruit punch smells smack you in the chops almost immediately.

The vibrant, hazy orange colour is equally unorthodox for a beer that claims to be a lager.

Once you’ve recovered from the initial bewildering sensory overload, your first eager gulp is greeted with a mango and peach-led fruit basket.

Just as you start questioning this beer’s classification, a sophisticated bitter finish arrives to quash all doubts.

Clerkenwell Lager is an eccentric, incredible beer that combines the best elements of American pale ale and European lager to create something absolutely phenomenal.

Sibling to Cask, it represents a step change for beer consumption in the UK’s capital city. 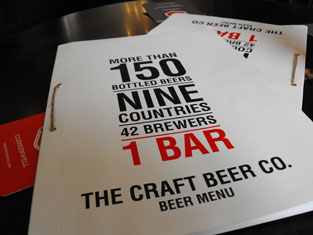 Aside from the unparalleled beer selection, what instantly strikes me about The Craft Beer Co. is that, compared to some of the other specialist beer pubs nearby, it has a decent amount of floor space.

If you’re a regular drinker in these kinds of venues in London you’ll know that’s a big deal.

The staff are knowledgeable and willing to engage in beer discussion – be that with know-it-all geeks or people who have no idea of what to go for next. A refreshing attitude when set against some of the repellent beer snobbery that I occasionally encounter around here.

For a fuller description of this beer-Valhalla, see Mark Dredge’s post on The Craft Beer Co. Though I’m kinda assuming you will have already read it, because if you don’t read Pencil and Spoon, you probably don’t like beer.

I’m at The Craft Beer Co. for the official opening night. The place is rammed.

There’s a real buzz and excitement around the place.

I had already planned that Clerkenwell Lager would be the first beer I went for.

I expected that something described as the ‘house lager’ would maybe be fairly plain, possibly with some token quirky flavour thrown in there by Mikkel.

I approached it as a beer I would ‘tick off’ before moving onto the more interesting choices. I couldn’t have been more wrong. Almost everyone I speak to picks Clerkenwell Lager as their stand-out beer of the evening.

So much of what makes this place special is summed up by this beer. They could have gone for something generic – a tasty, refreshing lager but fairly uninspired. They could have sold something like that by the gallon to the locals.

Instead, they’ve created something distinctive and, yeah, a little challenging. That tells me a lot about the ethos of this pub.

I spend all night talking beer with good friends and acquaintances.

There is a definite beer ‘scene’ in London. And what’s brilliant is that it’s not elitist, it’s not snobbish and it’s not exclusive – it’s warm and welcoming. This is a pretty special thing in a city where you can easily get lost in vast, faceless crowds and never truly connect with any of the millions of people that pass you by every day.

This night at The Craft Beer Co. is diametrically opposed to the experiences I have at pubs like The Bell, but it fills me with no less joy.

As I absorb the celebratory atmosphere, I realise this is the place I would take a visitor to this city who wanted the ultimate London beer experience.

I’d hand them a pint of Clerkenwell Lager and say ‘this is it, pull up a stool.’

I know they would get it.