Mikkel Borg Bjergsø has no brewery to call his own.

He is a ‘gypsy brewer’, travelling from brewery to brewery to create an extensive range of distinctive, sometimes challenging, beers.

Mikkeller 1000 IBU Light is not for the causal beer drinker, even with its Average Joe 4.9% ABV. 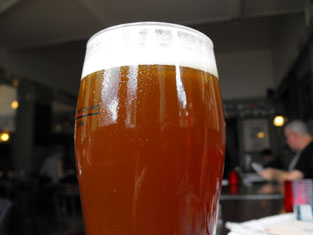 To the eyes it brings clouded, deep orange and a creamy white head; to the nose, freshly-sliced pineapple and squeezed lemon.

To the tongue it brings devastation.

Intense, marauding bitterness is all that you experience during the first couple of mouthfuls. Your taste buds are under attack.

But then, and especially when paired with spicy food, other flavours do emerge.

Buried amongst the almost impenetrable, drying, hop bitterness, a lemon drizzle cake sweetness pokes its head up, albeit momentarily.

The finish decapitates any fleeting moments of sweetness with further punishing bitterness that lingers, leaving you in no doubt that this is the bitterest beer you have ever drunk.

Named by poet Ezra Pound (mentor to T. S. Eliot and others) and announced to the world by artist Wyndham Lewis in 1914, Vorticism was an ephemeral art movement ended by the outbreak of war. 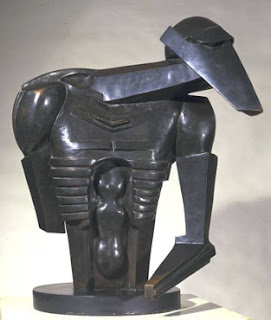 Centred around the Rebel Art Centre on Great Ormond Street in London, Vorticism seems closely aligned to Futurism and Cubism, but was considered by the artists and authors involved to be entirely separate.

It was a movement that sought to be fully-engaged with the modern, industrialised world and is characterised by dynamic, oblique forms that elegantly express movement, and by vehement, vociferous energy.

I am no art critic, so if you would like to learn more about Vorticism I suggest visiting The Vorticists: Manifesto for a Modern World at Tate Britain, which is what I did, or picking up a copy of Blast (which is something I also did).

I’ve strolled round the corner from Tate Britain to one of my favourite pubs in London: Cask.

I’ve had it before. I wouldn’t ever say I’ve ‘enjoyed’ it in the conventional sense of the word.

I choose it because I want to challenge myself.

Not challenge myself in a I’ll-have-the-hottest-curry-on-the-menu-please-mate way, but to refresh my thinking about what beer is.

Why does this beer exist?

This is really a question for Mikkel of course, but sitting here mulling over the exhibition of radical art I’ve just seen, it’s a question I want to find an answer for myself.

It is so bitter it’s almost difficult to drink. That makes it diametrically opposed to the singular goal of most beer.

I don’t believe this beer was brewed to be undrinkable (which it’s not) – I’d rather speculate that it was about investigating what was possible with beer.

How bitter can beer get?

That’s an abstract question that can only be answered by brewing beer.

Mikkeller 1000 IBU Light is almost an abstruse sculpture, made to answer a question that no-one was asking but provokes thought and inspires discussion by the virtue of being something that occupies space in the world.

If you look at Mikkeller’s website, it tells you that provoking and inspiring people is exactly what the brewery is trying to achieve.

It does seem that Mikkeller, influenced by events in the US over the past two decades, is at the spearhead of a modernist, radical brewing movement that is happening right now.

Whether you like the taste of Mikkeller 1000 IBU Light is almost irrelevant.

It’s whether you believe it should ever have come to be that is important.
Posted by Chris at 1:36 am