Described as a ‘pale double bock’ on its opulent label, Urbock 23° is sparkling gold in colour as it hits the glass. 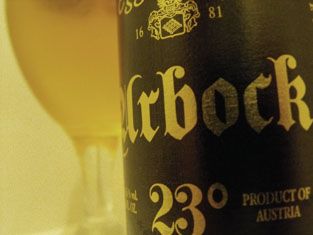 The lightness of its form belies the strength of this beer, but cognac, malt liquor and Christmas pudding fragrances combine to produce a concentrated aroma that adroitly communicates its 9.6% ABV – just in case you were in any doubt about its power.

Indeed, it is billed as ‘one of the strongest beers in the world’.

However, I’m reasonably sure I could reel off 20 beers from the top of my head that eclipse the alcohol content of Urbock 23°.

Caramelised, burnt sugar flavours are most prominent here, supported by nods to golden syrup and honey, without any sensation of thickness or gooeyness.

Bitterness, for me, is negligible.

Oh, and you can definitely detect the alcohol. 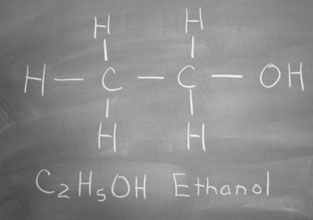 Ethanol is the specific type of alcohol that’s present in alcoholic drinks.

Ethanol is a psychoactive drug.

Without conducting any comprehensive global research or referencing any sources whatsoever, I’d speculate that it is one of the most popular recreational drugs on the planet, and has been for some time.

It is a central nervous system depressant.

Depending on how much you consume, what you’ve eaten and your physicality, effects can vary.

With a blood alcohol concentration (BAC) of between 0.01% and 0.06% you’re likely to sense an improvement in mood and feel more relaxed.

Get above 0.40% and you’re in serious trouble. Death cannot be ruled out at this stage.

Why do you drink beer?

If you’re reading this blog, I would imagine one of the reasons is because you enjoy the unparalleled range of complex, exquisite flavours that beer offers.

Some of those flavours will have been brought about through the process of fermentation, where sugars are converted into alcohol.

However, I would respectfully suggest that you also enjoy the feeling of intoxication.

As I write this, I am certainly feeling the mild effects of the 9.6% alcohol concentration in Urbock 23°.

It’s not an unpleasant sensation.

Alongside my appreciation of the appearance, aroma and flavour of the beer, I feel happy, relaxed and can perceive the stresses of the working day diminishing.

I’m not really sure why I’m writing this, other than that I feel this element of drinking is under-represented in beer writing. It’s marginalised in wine and spirit writing too for that matter, but I’m less interested in those things.

Drinking beer has a psychological and physiological effect on you. Drink enough of it in one session and you will be drunk.

I’m not going to drink any more tonight because I don’t want to get drunk, but I’m enjoying the effects of the ethanol in my bloodstream right now.

For some reason, I had to get this out there. It’s the elephant in the room for beer blogging and writing; the dirty little secret that everyone knows implicitly but nobody talks openly about.

I imagine brewers (well, certainly Schloss Eggenberg) and beer advocates in the media won’t necessarily thank me for making this connection explicit, but I feel it has to be acknowledged.

I’m not in any way promoting drunkenness or anything but moderate drinking; I'm simply seeking to state that beer is sometimes about more than just the flavour.

Ask yourself this: would you drink beer if it contained no alcohol?
Posted by Chris at 10:56 pm