On the cusp of brown, but just about on the red side of maroon, Oaked Arrogant Bastard Ale is instantly appealing. 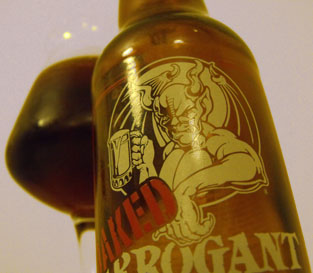 As you draw closer and lift the glass towards your mouth, pine sap and maple syrup scents fill the air.

The flavours move from milk chocolate sweetness to apple juice tang, before drifting seamlessly into a dry, herbaceous bitterness.

A subtle whisky character whispers from somewhere deep within it, presumably spurred on by the oak chips it’s aged with.

The Fountainhead is a novel. It was written by Ayn Rand in 1943. 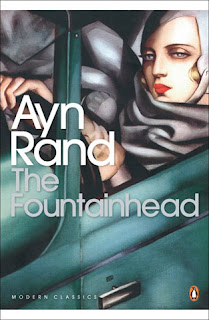 While the story is ostensibly concerned with architects and architecture, there’s little doubt in my mind that the narrative is a device to communicate Rand’s own ideological, political and philosophical beliefs.

Nevertheless, the plot is compelling and speaks to me in a way that only the best works of fiction can.

I find allegory is more powerful than candidness anyway.

You can feel Rand’s fierce intellect and unswayable principles pulsating from every page.

Say you had a complete vision – no, not vision...knowledge – of what the perfect beer should be.

Not even perfect, beyond perfect.

A beer that exists on a plane way above what the world conceives beer to be, but fulfils the role of beer so succinctly, so effortlessly, that it changes the meaning of beer.

And what if humanity rejected your notion of beer, hated you for dreaming to create something so different from the norm, and despised you for what they saw as conceited arrogance.

Would you still go ahead and brew it on a massive scale?

What if it crippled you financially, isolated you from everyone around you and ruined your life?

In The Fountainhead, this is the struggle protagonist Howard Roark faces with his own pure, creative vision of architecture.

He pursues it anyway.

In spite of the name and the claims the brewery makes, I don’t believe that this is what Stone were doing with this beer. It’s too good. Too many people like it a great deal. I am one of them.

Another question then: who is beer for, brewers or beer-drinkers?

Seeing as most of the former are the latter, I would suggest both.

Is this right though?

Should brewers just brew whatever they want and beer-drinkers either get on board with it or they don’t? Or is that what is happening in craft brewing anyway?

Obviously, there are commercial concerns, but the commitment to individual creativity, the disregard for public opinion and the wonderful variety of beer that would result from the widespread adoption of an individualistic, objective brewing philosophy aligned to Rand’s thinking is appealing to me.

However, it might result in a lot of beer knocking about that no-one likes.
Posted by Chris at 11:05 pm