The flavours created by the unique, spontaneous fermentation are not to everyone’s taste.

But they are to mine.

I’m not going to explain the mysterious art of lambic brewing in this post, but it is truly fascinating.

If you’d like to know more, I’d recommend the HORAL (High Council for Artisanal Lambic Beers) website as a starting point.

As I understand it, Boon Geuze Mariage Parfait is a blend of the brewery’s best lambic barrels, as selected by the head brewer himself (someone please correct me if that’s wrong). 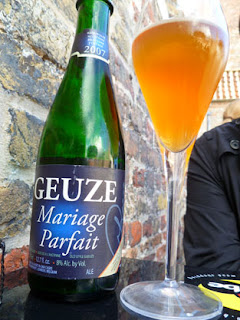 This selection process translates into a glorious example of the style, and a wonderful beer.

Once it’s in your mouth tart, grape-like characteristics sweep you towards a dry finish that is not unlike a Marlborough Sauvignon Blanc (yes, I sometimes drink wine you know).

Bruges is a city in West Flanders, Belgium. 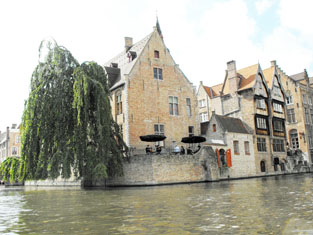 For 300 years, from the 13th century until the 16th, it was one of the most important trading ports in Europe.

Nowadays, it is mainly tourism that fuels the city’s economy.

The historic centre is a UNESCO World Heritage Site, and much has been done to preserve the city as it was in its glory days.

It’s beautiful, charming and very pretty without being quaint.

It is also an absolute mecca for beer lovers.

Beer and I went through a bit of a rocky patch in August.

I was working hard on other stuff, and didn’t really have time to give it much attention.

Yeah, I was still drinking it, but it felt like I was just going through the motions, simply consuming tried and tested standards, and not making the effort to seek out anything exciting.

I began to feel a bit disillusioned – did beer really matter that much to me? Is it actually important in my life?

In other words, the relationship had gotten a bit stale. I certainly didn’t feel like writing about it.

It took Bruges to reignite the romance.

The dizzying devotion to beer in this city is almost too much to comprehend.

Beer lists dwarf wine lists in every bar and restaurant.

In the specialist beer joints I found it hard to focus, my eyes scanning vast menus comprised of some of the greatest beers in the world.

You could be in Bruges for a month, drinking a different beer every waking hour, and still thirst for more.

Many beers could have been included in this match – like the 3 Fonteinen Oude Geuze I had at 't Brugs Beertje, or the house Tripel consumed at De Garre, the Westvetleren 8 at Cambrinus, the draft La Trappe Isid’or at Café Rose Red...

But the Boon Geuze Mariage Parfait made the cut because as I was drinking it I had one of those perfect moments that this blog is all about.

A zen-like moment of clarity, calm and unbridled happiness, where the connection between the romanticism of lambic brewing and Bruges became abundantly apparent, and where my passion for beer was rekindled.

Beer is important. And I love it.