This is my fourth post about Mikkeller this year.

Though involved in one of my desert island beers, I’m by no means a fanboy.

It’s just that Mikkel makes interesting beers. Beers that people want to talk about. Beers that are easy to write about.

It’s Alive is his interpretation of Orval. 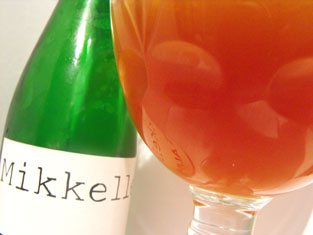 In my head there’s a complex analogy at work: boxing and beer.

I’m not going to reveal (yet) the ridiculous extent to which I take this, but it’s relevant to this post.

Orval is the greatest heavyweight of all time according to my list. Pound-for-pound I reckon it just outclasses Saison Dupont, which I place at number two. 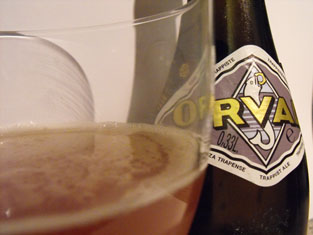 In keeping with the boxing analogy, this is clearly more match-up than match (can you match beers with beers? I think so).

It’s been inspired by Mikkel’s comments in this interview, around the 27-minute mark, where he indicates that he believes It’s Alive is actually better than Orval.

That sounds like some serious pre-fight trash talk to me, despite displaying a great deal of taste by paying due respect to the champ.

So, with the help of a glamorous assistant, it’s blind-tasting time.

The beers enter the ring one at a time, separate from one another so I can’t compare them side-by-side.

Beer 1 is highly-carbonated and blood orange in colour with an off-white head.

It’s intensely fragrant. Like a girl wearing too much perfume, it clears your nasal passages with its slight astringency and floral notes.

There’s sharp, grape sweetness in the mouth straight away, which is followed up swiftly by an intense sawdust-like dryness.

Beer 2 is lighter in colour – peach-orange but with way more haze than the much brighter first beer.

It’s more subtle on the nose, though raspberry sweetness and damp wood come through strongly.

There’s a similar initial wine-grape sweetness, but it’s subdued and not anywhere near as sharp as its predecessor.

Orange zest contributes to a sherbet sourness that fizzes in the month.  As the bubbles dies down, understated bitterness leaves you thirsting for more.

There’s a clear winner: Beer 2 with a third round knockout.

There’s also no way this test would ever get included in any scientific journal. I know Orval too well by sight, smell and taste – and love it too much – for this experiment to ever be considered fair.

But I was hoping to be surprised, to have my world turned upside down.

However, It’s Alive is like an MP3 version of Orval – compressed, with massive spikes in the high and low end (little bit of chat for you audio geeks out there).

That doesn’t make this challenger a bad beer.

It just means it can’t really mix it with one of the true greats.