It goes without saying that St Peter’s bottles look great.

A brilliant piece of packaging design, they are truly distinctive and ultra-appealing.

I reckon the brewery can probably attribute at least 25% of their sales to the way these bottles look. 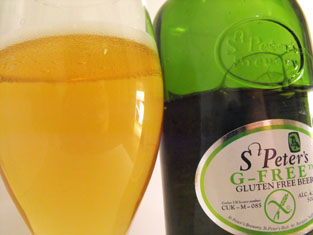 It’s pale, straw gold in colour and bright as a button.

It’s sweeter than I expect, slightly oily, with a dry pilsner finish that doesn’t quite cut through and struggles to provide any balance.

Aside from the Amarillo hops and what I presume is a pilsner malt of some sort, the label does not make it clear what the beer is made from.

My fiancée is allergic to wheat. 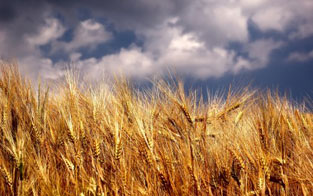 It’s likely that it’s specifically a protein in wheat that causes the allergic reaction, possibly glutenin – an essential component of gluten (which is a protein composite) – but it’s complicated, and I’ve probably got that wrong (sorry Christina!).

She is not, however, allergic to barley or rye, as the gluten derived from these products presumably doesn’t have the same protein composition. Again, I’m not entirely sure.

Oh, and she’s also similarly allergic to nuts and oats.

As you can imagine, eating out can sometimes be a stressful experience for us.

It’s gotten better over the last couple of years as awareness of the severity of food allergies spreads.

But if we feel a waiter isn’t taking the issue seriously, we’ll walk. It’s really not worth playing fast-and-loose with your life over a meal.

Before I really knew what went into beer, we assumed it was off limits too, especially when we saw gluten-free beers on supermarket shelves.

Now I know that the majority of beer – obviously excluding a number of Belgian varieties and wheat beer (duh) – is produced using just four ingredients (barley, hops, water and yeast), it should be back on the menu, right?

Well, not really, no.

Like the disinterested waiter, the ambiguity and lack of consistency on beer bottle labels when it comes to ingredients means it’s often not worth the risk.

This St Peter’s G-Free beer doesn’t list the ingredients on its label. I find that utterly bizarre.

A quick survey of my cellar reveals that bigger UK and European breweries do flag that their beer ‘Contains barley’ or is ‘Made with wheat’.

However, the smaller UK craft breweries and one huge US craft brewer do not list any ingredients whatsoever on their label, bar the hop varieties used.

Do the same labelling laws for food not apply to drinks? Maybe a brewer can help me out on this one...

It’s this lack of clarity that concerns me. Many beers are undoubtedly perfectly fine for my fiancée to drink – but would you risk your life for beer?

I reckon breweries are missing a trick here.

I imagine there are many people in similar situations to us – the fact that there are beers specifically targeting people with food allergies suggests there is demand.

And that demand is just going to grow as more and more people get diagnosed with allergies of this type – which they are.

Most brewers I know are obsessed with precisely controlling what goes into their beer.