Brouwerij Drie Fonteinen makes my favourite gueuze – the one that’s in the title of this post.

Today I’m drinking it from a bottle that was sealed in December 2000. 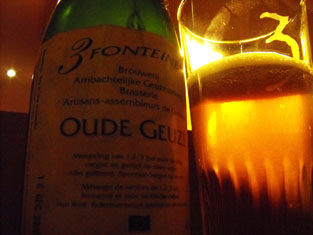 Though ‘younger’ is a relative term here – this Oude Geuze, as it is with similar products from the other HORAL members and traditional gueuze blenders, is a fusion of 1-, 2- and 3-year old lambics.

In order to underline the differences I encountered in the aged version, I’m going to talk generally about 3 Fonteinen Oude Geuze now.

Deep apricot in colour, it smells like taking shelter under an oak tree during a summer thunderstorm.

After that aperitif it’s straight onto the main course: steak with peppercorn sauce.

As your plates are cleared away, a drying, Champagne-like finish emerges.

While maybe not having the chic appeal of Moeder Lambic Fontainas, or the charm of A La Bécasse, Le Bier Circus should definitely be on your Brussels beer hitlist. 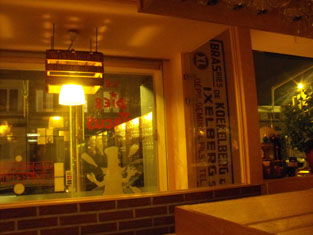 The beer list is fantastic, particularly when it comes to aged bottles.

It was quiet when I visited, but I liked that. Slightly off the beaten track, it’s a cool, relaxed vibe that greets you when you enter – particularly appealing when set against the relentless bustle of Brussels city centre.

This post is really just about me documenting my consumption of a 10-yr old version of one of my favourite beers.

Last time I was in Belgium was the first time I drank 3 Fonteinen Oude Geuze. It was instantly added to my greatest-of-all-time list.

I shelled out more than €11 for this vintage 375ml bottle, but I would have easily paid double that.

Initially I’m concerned I’ve made an error of judgement. There’s hardly any aroma coming off the beer as I pour. I suspect it may be dead.

But it’s still as effervescent as fuck, so I convince myself everything will be alright.

That citrus acidity I mentioned? Turn that up to 11! Super spiky and way more punchy than in younger versions.

The meatiness is still present, but it’s softer, more rounded, more melt-in-the-mouth – a bit like slow-cooked or cured meat.

The sparkling dry finish remains as appealing as ever.

I can’t believe the process this beer has undergone in the bottle over the past decade. Rather than mellowing, it’s got more intense and added complexity.