As far as I can remember – my notes for this are almost entirely covered in mustard and there’s little info online – Brooklyn Cuvée de la Crochet Rouge Riesling is a variation of the superb Local 1, aged on Riesling lees. 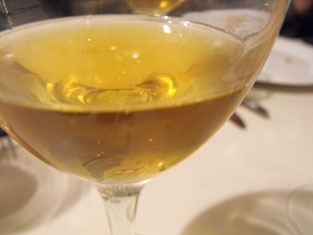 The ageing process has resulted in this beer drinking more like wine than beer, but not in a bad way. Not bad at all.

There’s still elements of the bright citrus and slight sourness found in Local 1, but there’s a massive hit of vinous grape and the finish is pure, unadulterated dry Riesling (a wine I quite like).

Garrett Oliver is one of the few genuine beer superstars. 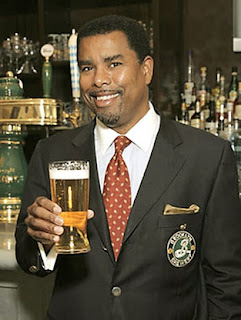 Brewmaster at the Brooklyn Brewery, he is enigmatic, talented and a great advocate for beer.

He stands out a like the most stylish sore thumb you’ve ever seen in an industry awash with unfunny beer slogan t-shirts.

At this point I’m trying not to gush too much – fawning fan boy is not a strong look. If you want to know what makes him special, there’s a extensive feature in Edible Brooklyn that I came across a few months ago.

Also, he doesn’t seem to age, which suggests those ‘beer has health benefits’ claims may have some validity.

I’m at The Draft House, one of my favourite SE1 haunts, for the London launch of The Oxford Companion to Beer, edited by the man himself.

I've been out of the beer blog loop for a while, but I’m aware there’s been some debate about this book. I’m late to the party, so I’m not going to wade in here with any opinion, particularly as I don’t have the knowledge or the expertise to do so with any authority whatsoever.

One thing Garrett says about the book particularly resonates with me. Again, the mustard-drenched notes prevent an accurate direct quote, but it was along the lines of ‘this book details the things that are happening now in brewing, the things that aren’t written down anywhere else’.

As a brewing industry outsider this felt like the truth.

I’m as thirsty for knowledge about modern brewing practices as I am beer. If details of recent advancements in brewing techniques are either ready available in print or easily accessible online, I’ve yet to come across them.

I am also extremely time poor, so consuming great scientific tomes or even undertaking practical study through brewing is not really an option when all I want is a quickly digestible answer.

Couple that with a memory like a goldfish that renders anything a brewer tells me pointless within a week and you get a man who sometimes struggles to comprehend what goes into creating beer at a granular, contemporary level.

Oral tradition to written history. An important step for any culture.

Garrett also states that the purpose of crafting beer is so that people enjoy consuming it. I’ve questioned whether that should be the case in the past, but it is a good point nonetheless.

And as I enjoy consuming this Brooklyn Cuvée de la Crochet Rouge Riesling I begin to understand this position more.

Garrett has no reason to innovate  like this. He could just churn out the core beers in his range (brilliant as they are) and watch the money pile up.

Instead he opts to do something that pleases me greatly with its complexity of aroma and flavour.

And he's done it with such sophistication that he could never be accused of gimmicky attention-seeking.

A true man of the people.