Every year since 2008, Cantillon have conducted an experiment.

That experiment is Zwanze. 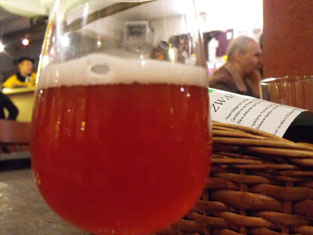 This year no bottles were made available for sale.

If you didn’t get to taste it at one of the participating bars (none of which were in the UK) on Zwanze Day 2011 (17 September), the only place to drink it is at the brewery itself.

It pours a pinkish-red with a fizzing white head.

Raspberry and damp soil fumes pulse from the glass.

Once it’s past your lips, the real alchemy begins.

Apologies for shattering any visions you may hold of the Cantillon brewery being on an idyllic farmyard in rural Belgium, but it actually resides in a dingy, semi-industrial area of Brussels.

That doesn’t make it any less special. 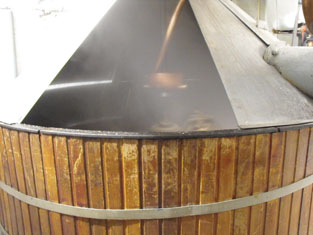 The brewery is open to the public all year round, but at the start of their brewing season (they can only brew when ambient temperatures drop to a certain level) they invite people to join them for a Public Brewing Session.

I don’t have much more to add here other than this: if you love Cantillon beers as much as I do (i.e. a lot) I urge you to attend one of these events.

It’s 6.30am on a Saturday morning and the alarm has just gone off in my hotel room in Brussels.

Since 10pm there has been a wall of noise assaulting my eardrums.

Shouting, screaming and weird chanting. At 7am it abruptly stops. Instant silence.

It’s still dark as I emerge bleary-eyed onto the Brussels streets.

The only people on the streets are drunken men stumbling into one another. No one else.

I work and play hard in London. I live in a fairly grimy part. Brussels shocks me.

When I walk through the door of Cantillon all the tension and unease brought about by the unsettling night of manic screeching dissipates.

The combination of restorative black coffee, croissant and wood stove does wonders for my fragile state.

It’s busy as I wait for the English tour to start. There are dudes here who are sloping around, clearly drunk. It’s slightly surreal.

The tour itself is incredible. I’ve been to Cantillon before, but to be there when they are actually brewing, in amongst the buzz of the Public Brewing Session is magical.

To watch – and smell – such astounding beer being crafted is a privilege.

My euphoric mood is only slightly tarnished when talk of increasing pressures from health and safety legislators suggests there is a real threat to this enigmatic brewery and the traditions it upholds.

After the tour we get our complimentary beer. I’m drinking Gueuze at 9am. I’m at a bit of a loss as to what to do with the rest of the day. I had thought I’d be here all day watching different elements of the brewing process. But evidently it’s now just about hanging out.

I get chatting to @jonathanmoxey, who was on the tour with me (I was the only person on it from the UK).

He proposes we share a bottle of Saint Lamvinus. I second the motion. And I’m so glad I did.

Once that had been consumed there was only one logical step: Zwanze 2011.

It was unlikely I would ever get another opportunity to try this beer. It had to be now.

Oh how it fulfilled expectations.

I felt like dropping to my knees and pleading to the Cantillon staff and volunteers to release just one bottle to me, but I knew it would be ultimately futile.

And in a way, only being able to drink it here, in this moment, crystallises just how special this beer is and ensures the memory of this perfect experience is preserved.

As I stumble back out into the sunlight, even the Brussels grime cannot harsh my vibe. It’s Zwanze-proof.
Posted by Chris at 11:00 pm