Stillwater/Mikkeller Two Gypsies Our Side and branding

Stillwater/Mikkeller Two Gypsies Our Side, as its name suggests, is a collaborative brew. 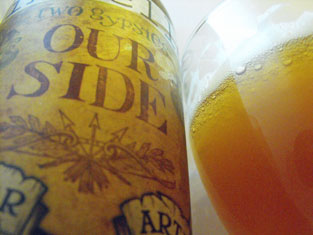 It’s dusky amber in colour with a head that’s just a shade off white.

Bakery-like wafts of warm bun sugariness and all-spice hit you when you go in for a closer look.

The high carbonation means it’s a few nanoseconds before sharp, lychee-like fruit flavours are detectable, which are rapidly followed by white wine dryness and a sour yeast finish – familiar, but definitely more restrained than the Belgian archetypes this beer pays homage to.

It’s only when the beer leaves your mouth that the cara-malt sweetness from the Mikkeller side of the deal makes its presence felt.

I’m not talking about livestock here (though etymologically the concepts are obviously linked). 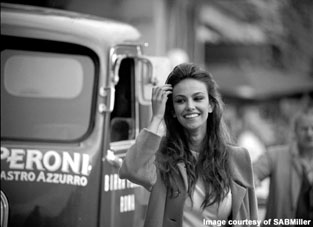 Nor am I just talking about package design.

A brand is a weird, ephemeral thing that even those who spend their professional lives talking about it find hard to define.

When it works well, a central idea permeates through everything an organisation does, guiding its strategy and providing its raison d’être.

Ultimately, for commercial enterprises, it drives sales by creating a connection with a target audience that influences their behaviour in such a way that they consume more of the product a particular company is offering.

This interaction happens on a strange, emotionally-driven level that no-one – despite rigorous experimentation and wild claims to the contrary – truly understands.

It creates intangible points of difference in crowded market places.

Why am I drinking this beer?

Mainly it’s because Stillwater’s Stateside Saison is a great beer and I’m intrigued to see what a variation of tastes like.

Partly it’s because I’ve had good experiences with Stillwater and Mikkeller beers before and am confident enough that I am unlikely to have a bad time drinking this beer that I’ll splash out on it – i.e. the fear that  spending an equivalent amount on a beer I have no existing relationship with will turn to be be crap is more powerful than the hope that I could experience something truly incredible.

It’s kinda because this beer is expensive and relatively difficult to get hold of, so I see it as a luxury item, a bit of a treat.

It’s also because I just love the fucking label.

It’s definitely not because the shared values (bleurgh) of the two breweries are so succinctly expressed by a collaboration.

But all of these things are attributable to brand affinity and positioning.

Brand management is crucial in beer.

Because the vast range of products on offer are essentially so similar that it makes choosing between them difficult for consumers.

The big behemoth breweries know this, which is why they spend mega bucks on advertising products that all taste similarly like shit, highlighting redundant points of perceived difference.

However, creating differentiation through branding is important in the craft beer world too – as much as we may be loathe to admit it.

Yes, flavour is a key differentiator in a connoisseur‘s market, but the sheer range of choice means breweries have to do something more to get people drinking their beer in any significant volume.

How many big hoppy US-style IPAs are there on the market at the moment? How many imperial stouts? What makes people decide to spend their hard-earned bucks on one over the other in the first instance?

The craft beer market is lucky in that its target audience are habitual experimenters, prepared to seek out something new on a regular basis.

If you want that something new to be your beer, make sure you’ve got a brand.

And if you're looking for a brand consultant to guide your brewery’s marketing strategy, I’m available for an obscene hourly rate and guarantee I'll have anyone who does any actual work at your place hating me within a matter of minutes.