There’s little in terms of aroma, but that’s probably because I’m sweltering next to the kitchen in a brewpub, and my nostrils are ruined by a million competing aromas, one of which is my own sweat.

Then bang – a whole load of woodchip, soil and peat are thrown into my mouth, rounded out by some toffee sweetness. 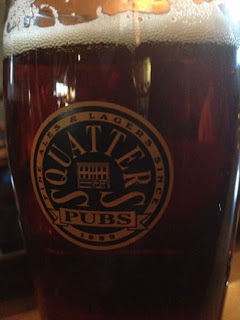 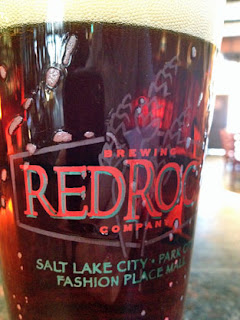 Baked bread aromas, the kind pumped out by supermarkets to get you to buy stuff, are instantly recognisable.

Then wallop – hop smack to the face. You just got knocked the fuck out.

Yeah, I can dig, I’m cool, I’m down with ultra-hopped beers. Listen, I’ve taken 1000 IBUs and smiled. I just wasn’t expecting that kinda bitterness in a nut brown ale, okay?

The merest hint of caramel sweetness calms me down. 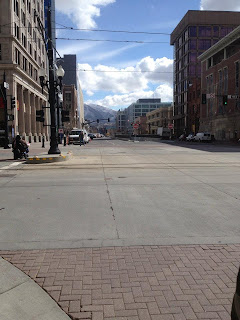 Just in case it’s not clear: I like the place.

Mountains, beer and friendly vibes. If you think those things suck then don’t read what I write.

If you want to learn more, the internet will help you.

This is my fourth post about Salt Lake City; that’s as many as I’ve written about Bruges.

And I could have written a few more.

Like my time at the ski resort, sliding about in a tweed blazer and a pair of Grenson’s, convinced I was Hugh Grant starring in a film about a foppish Englishman up a US mountain, imagining I was using my charm and boyish good looks to win over the locals, all the while drinking Uinta Brewing Yard Sale Winter Lager.

For that performance I received the prestigious Most Inappropriately-Dressed Man Up A Mountain Ever Award.

I’d like to thank God. Without Him, none of this would have been possible. Oh, and my agent, my management, and everyone at beerandlifematching.com. I love you guys.

Or I could have written about the conference I was at. The conference that served free local craft beer pretty much non-stop. When I think about the corporate events I’ve been to where there’s been unlimited free warm Beck’s...

But that’s enough now; the rest of the memories are just for me.

The final thing I want to communicate about Salt Lake City and beer is this: service.

I know the US has a service culture, and those involved in the service industry over there are dependent on tips blah blah yawn blah.

Americans understand service and why it’s important. Especially in bars.

The reason I’ve covered two brewpubs’ beers in this post is because the service – and genuine friendliness – at both locations was so beyond what I usually encounter it needed documenting.

It was the same everywhere I went.

Well, because actual US bars have decent table service. That’s why there can be stools running along the length of the bar with dudes sitting there all night. You don’t need to go to the bar to get served.

The way to get served in British pubs is so removed from that, so deeply ingrained in British culture, that it just does not translate.

Let’s just have great pubs that serve outstanding beer in a way we all understand, and leave the US beer bar experience to the people who know how to make it work.