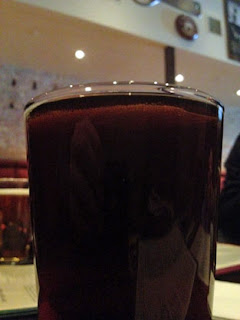 The merest hint of carbonation and a barely perceivable off-white head enhance the illusion.

The smell of burnt toast shatters it.

It’s relatively thin-bodied, with an ABV 1.4% lower than my Fuller’s London Porter benchmark of 5.4% (there’s a reason for the 4% ABV, which I’ll cover in a future post).

So it’s not quite got the complexity or richness of the World’s Third Greatest Porter According to Ratebeer®, but that doesn’t mean it’s not enjoyable.

Let’s face it though; it’s all about that name really, isn’t it?

You’ve probably heard of Mormons, but I’d hazard a guess that most secular people, particularly in Europe, know little about their history or beliefs.

Whatever your take on religion, the story of The Church of Jesus Christ of Latter-Day Saints (LDS) is a fascinating one. 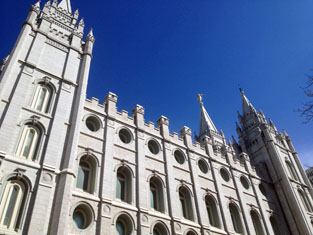 One full of unique perspectives on the mainstream Christian narrative, of ‘battles’ and ‘wars’, of persecution, of arduous migration, and, ultimately, of settlement and the foundation of a city.

And one that does have a relationship – well, more of an intertwinement – with beer.

Key to understanding this entanglement is knowledge of the Word of Wisdom, a code practised by LDS devotees that warns against consumption of alcoholic beverages, coffee, tea and tobacco.

Greg Schrif, founder of the Schrif Brewing Company, Wasatch Beers and key partner in the Utah Brewers Cooperative, has a story that to me is every bit as enthralling as that of the LDS.

One that’s forever defined by interactions with the LDS.

In some ways it weirdly mirrors some aspects of their tale.

When he set out in 1985 to open Utah’s first brewery since the last closed in 1967, the forms didn’t exist at the Utah Department of Alcoholic Beverage Control that would allow him to do so.

Brewpubs were illegal in Utah until Greg came along. Illegal.

He faced down Mormon legislators who seemed determined to halt his progress.

Sitting in a specialist beer bar in Salt Lake City, a city founded by The Church of Jesus Christ of Latter-Day Saints, drinking a beer that pokes a bit of fun at Mormon practices is a truly a distinctive experience, one that can’t be replicated anywhere else.

It’s my first evening in this city and I’m both bewildered and giddy with excitement.

I have no idea what’s going on at this point.

I haven’t covered the story of either The Church of Jesus Christ of Latter-Day Saints or Greg Schrif in any detail in this post – there just isn’t the room to do either justice.

I hope this entry inspires people to read more about both subjects.
Posted by Chris at 11:25 pm