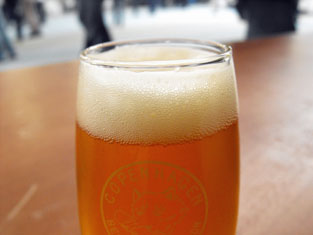 It glows hot orange like burning gunpowder. Which is apt.

Grand Marnier and Cointreau are not drinks I enjoy, but this has something of the orange liqueur about its aroma it pleases me, mixing as it does with a hint of the tropics.

The juciest, freshest mandarin oranges. Not too sharp. The right distance from overly sweet.

Then pepper. Freshly ground black pepper. This shouldn't work. It does.

Just as you're trying to work that one out, you're brushed lightly with the branch of a resinous, evergreen tree, providing the optimum level of dryness to trigger a repeat hand to mouth motion.

Listen, I don't want to rub it in, so I'm not going to bang on too much about the Copenhagen Beer Celebration. 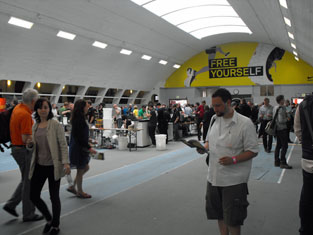 I've even included a shot of the fairly souless sports arena it was held in to make you feel better.

I would advise not clicking the link I've included above. In fact, hopefully (for you), they've taken the site down.

Needless to say the list was incredible, the people were better and the vibes were immeasurable.

Mikkel Borg Bjergsø knows how to throw a beer-focused party.

It's rare to be in a situation where there's so much hard-to-get, once-in-a-lifetime beer around you that your head spins.

You're pulled in different directions. All drinking tactics and strategies go out the window after ten minutes.

It's rarer still, when confronted with such exceptional variety, that one beer makes you think 'Christ, I want more of this. A lot more.'

Powder Burns was that beer.

In fact, there were too many great beers to do them all justice here.

So for one to stand out, to stick its head above the parapet, really is something.

The fact that I'm unlikely to drink it again any time soon fills me with great sadness.