De Ranke XX Bitter is a collision of influences. 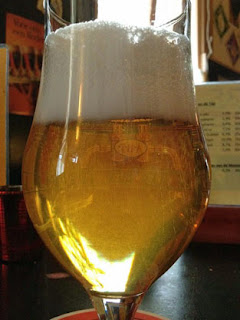 The British-sounding name and inclusion of Brewer’s Gold.

The pale pilsner malt and abundance of Hallertau hop flowers.

The legacy of its country of origin’s brewing tradition.

Each aspect is managed with care and reverence to create a beer I revisit time and again.

Shimmering gold with a loose, fluffy head, it fizzes gently as I await further sensory stimulus.

Aromas of cut-grass, dried out by the heat of the summer sun, and a surprisingly appealing hint of soap, swirl and dance together.

The dryness hits your palate instantly and without apology.

But if you’re prepared to wait, to give it time, you can make out a light-hearted summer fruit sweetness as it skips across your field of vision. In a pretty dress.

Only then can you begin to appreciate just how clean and so very elegant this beer is.

Bong are the last band I’ll watch at Roadburn 2012. 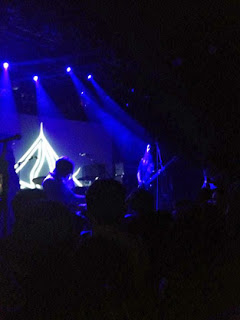 The following day I’ll return home to normality. Or at least attempt to.

It’s been four days of doing nothing but losing myself in captivating music.

Watching Bong at this stage of proceedings is almost like a punishment. No, that's not right – more of a test to see if I can cope with the situation and be rewarded with an exceptional experience.

Because I know what I’m going to be getting.

And that’s an hour plus of ritualistic, heavy, droning, unsettling, consciousness-altering transcendental jams.

I realise the above makes it sound like I’m not looking forward to Bong, but I really, really am.

I’m just a bit scared. I’m not sure my fragile mind can take it.

I’ve seen some great bands at Roadburn – the two I’ve written about already, Agalloch and Ancient VVisdom, along with jaw-dropping performances from Yob, Barn Owl, The Obsessed, Sleep, Jucifer and more – but Bong are the band I’ve decided on as the final entry in this little beer and Roadburn diary.

Though I have drunk other beers closer in proximity to Bong’s performance, it’s De Ranke XX Bitter that’s on my mind as I take up a position worryingly close to the stage.

I’m not entirely sure why.

As Bong begin to produce their all-consuming swirl, drenched in an otherworldly purple-blue light, I feel slightly like my brain is melting away into nothingness.

Then things begin to move back into focus.

Bong are so drawn out, so slow, and so epically heavy, that their music suggests to me that bigger, slower things exist in the universe. Bigger and slower than anything I could ever hope to comprehend.

Cutting through the heaviness and power of their delivery is the whisper of something more, something obscured by the limitations of my own human existence.

And that’s kinda how I feel about XX Bitter, and beers that I believe to be great in general.

They are almost beyond my comprehension, with the complexity and subtle inferences in their flavours and aromas sending my mind spinning through the galaxies, searching for a handle on what’s happening, without any hope of truly being able to understand all that they mean.