Created to celebrate the 125th anniversary of brewing at De Koningshoeven in 2009.

Named after Isidorus Laaber, the monk that went to Munich to learn the craft.

La Trappe Isid’or can be considered a ‘new’ Trappist beer. 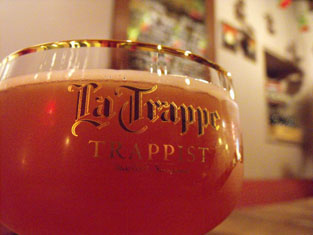 The intensity of the body colour and the golden rim of the glass give it a deeply luxuriant look.

And a feeling of opulence in your hand.

Fairly atypical sweet malty notes dominate as you lift the goblet towards your face, but there’s an alluring hint of vanilla in there too.

Silky, smooth and subtly sweet, it buries that 7.5% ABV deep within the annals of a 125-year old brewing tradition.

A light, sophisticated bitterness ends proceedings. It’s almost not there unless you think about it.

Ancient VVisdom, at a very basic level, sound like Jar of Flies-era Alice in Chains singing about Lucifer. 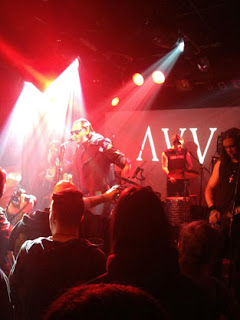 If that doesn’t appeal to you, I’d probably stop reading now.

They are one of the bands on my ‘must see’ Roadburn list, despite being roundly criticised in almost everything I’ve read about them.

Turns out some of them are in hardcore bands I’ve been into over the years, Integrity and Iron Age, but I didn’t know that before Roadburn.

I really dig A Godlike Inferno.

I have some downtime between bands.

Alone, I seek out a bar I’d read up on before coming to here: Biercafé Kandinsky.

It’s slightly off the main strip of bars in Tilburg.

As I walk through the door, take a seat at the bar and open up a beer menu, I consider punching myself in the face.

Why didn’t I do more preliminary beer research last year? This place has a great vibe, is not brutally-packed full of Roadburners, and has a banging list.

This isn’t my first beer in Tilburg, but I ask the barman for something local on draft, as is my tradition.

He suggests the La Trappe.

Wait, I know La Trappe is the only Dutch Trappist beer, but just because it’s produced in this country doesn’t mean it's local.

I did not know that.

Okay, so I’m at the world’s greatest music festival, killing time before seeing a band I probably won’t have the chance to catch ever again, and I’m drinking draft Trappist beer pretty much as fresh as it’s gonna get.

The beer is great, especially when accompanied with the local cheese and meat board I order.

I gulp and scoff it all. Nom.

My friend joins me, we have another beer and then head to one of the smaller rooms at the festival to watch Ancient VVisdom.

Warm in the glow of the Isid’or, the performance is intense and captivating.

There is a distinct suggestion of grunge – down to the guitarist that looks like he’s about to die from heroin overindulgence – that sends me spinning back to the early 90s.

The tinge of darkness from the occult content ups the forcefulness of the events unfolding on stage.

It’s going to take a lot to top this.