At sunset, rays of light from the sun have a longer distance to travel through the atmosphere.

This journey is too long for the shorter wavelengths of green and blue, and these colours are stripped almost entirely from the spectrum seen by the observer, leaving only deep red and orange hues, the likes of which are replicated almost exactly in Green Flash Brewing Co. West Coast IPA. 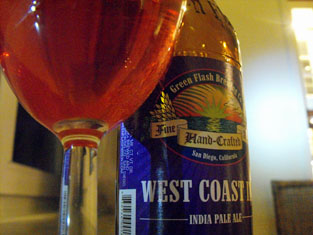 The head is off-white, motioning vaguely in the direction of brown in a way that's not dissimilar to toffee ice-cream.

Which pretty much puts an end to the evening sky analogy I was working up.

Oh well, the science is probably wrong anyway – it's half-remembered from a lesson at a rubbish school circa 1996.

I can run with the toffee comparison though, as the cara-malt aromas here suggest you've had a Toffee Dodger smashed into your face.

Wiping that biscuity debris away, there's a significant amount of fruit here too – a familiar triumvirate of grapefruit, melon and pineapple.

Do they still make Lilt? If not, sniff this for a reminder.

There is caramel sweetness in the preliminary taste encounters, but this sugar vibe is thin and light, rather than heavy and syrupy, dissipating at pace to reveal more bitter flavours.

At first, you think the bitterness is going to be brutal and way too much, as it accelerates quickly from 0 to 100 in nanoseconds, building intensity as it hurtles you towards oblivion.

Just as you brace yourself for palate ruination, it plateaus, and you realise West Coast IPA is a beautifully balanced, smooth yet exceptionally complex beer, that's as easy to knock back as it is to saviour.

Alongside familiar tropical fruit flavours, there's a real wine grape undercurrent which blows me away every time I drink it.

This beer vies for top spot in my US IPA Greatest Of All Time List, alongside Odell IPA and Sierra Nevada Torpedo.

This is who we are, this is what we do.

A perfect example of the style and a wonderful beer.

I just spent way too much of my word count allocation on the beer, so I'm a keep this brief.

Ølbutikken is a cool little basement store just round the corner from the Mikkeller bar in Copenhagen, with a few fridges and a scattering of shelves. 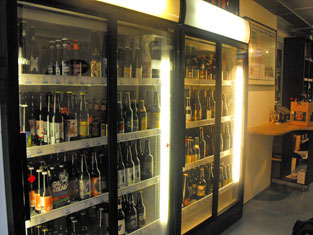 Those shelves aren't bulging – though perhaps that's because of the locust swarm of craft beer lovers that made the pilgrimage to Denmark's capital the week I visited – but the range is focused and tight.

There is no dead weight.

Plenty of Mikkeller, a few other Scandis, some incredible US names and the best of the Belgians.

There's a table and a few chairs near the window where you can hang out and drink the beer you've just bought.

If you leave here without buying anything, you're in the wrong place.

As soon as I walk in there's a supremely-chilled, friendly vibe that reminds me instantly of the De Struise store in Bruges.

There is a lot of good beer down here.

I refer to my purchase criteria. There are some restrictions.

One large bottle to go in the suitcase, two smaller ones for drinking at the apartment.

I know what the large bottle is going to be.

I knew before I got here.

Every AleSmith beer I've ever had has been great, and they are scarce enough in the UK that I long to cradle them in my arms.

Wee Heavy gets yoinked from the shelf. Because it's incredible. And may have fared better on its travels than some of the others.

After seconds of deliberation I grab Green Flash Brewing Co. West Coast IPA. Because I love them. And love this beer.

The satisfaction I feel drinking it later back at the apartment is overwhelming.

Weep because it is truly astonishing, but also because of its rarity in my homeland.

Please, someone distribute Green Flash and AleSmith more widely in the UK.

Otherwise I'll have to go back to Copenhagen...