Jacobsen Original Dark Lager is the only beer brewed  by Carlsberg I will ever write about. 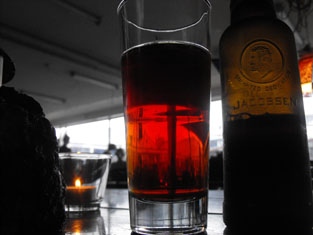 Non-existent head, however, and little visible carbonation – which is a bit weird for a 'lager'.

Damp oats and synthetic sugar substitutes are all I can smell.

It tastes like the cheapest honey in the supermarket and Calpol.


The hip part of town

Kødbyen is a bit weird. 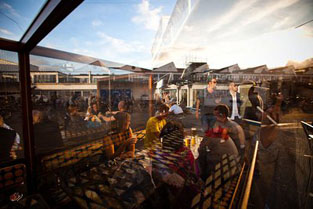 It feels like it's in a transitional phase: from 'meatpacking district' to hyper-cool urban hangout.

But the slaughterhouses are being squeezed out by creative industries, fashionable restaurants and trendy bars.

Dead animals snuggling up against hipsters.

I quite like it. It does stripped-down industrial minimalism way better than any UK attempt at a similar vibe.

Though I believe I'm basing this mainly on the fact it still has those plastic strips hanging down in the doorway that you will have only encountered if you've shopped at a lost-in-time butchers in the north of England.

Considering Copenhagen's rep as one of Europe's coolest beer destinations, I expect the menu options to be better.

I know what Jacobsen is.

It's Carlsberg's response to Denmark's craft beer / microbrewery explosion of the early- to mid-2000s.

Part of me feels this is a good thing.

Yeah, you should be investing your massive resources in creating more interesting beers.

Unfortunately, this Dark Lager is dogshit, and completely misses the point, feeling more like a branding exercise than a genuine attempt to do something to engage a more sophisticated palate.

Talking to the locals there's a real feeling the craft beer movement peaked circa 2005–7 around here and has been in decline ever since.

Did Carlsberg's meat headedness contribute to its demise?

As evidenced by the inaugural Copenhagen Beer Celebration 2012.