Svaneke Bryghus In Your Pale Face IPA and The Bishops Arms

Svaneke Bryghus is a brewery in the small town of Svaneke, on  the eastern coast of a Danish island called Bornholm.

An island that’s actually closer to Sweden than it is Denmark, but as far as I can tell there’s no Falklands-level tension about this.

In Your Pale Face IPA has the word pale in its name. Twice. 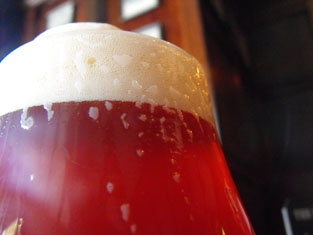 So when you find yourself staring at a deep mahogany red beer with flashes of orange haze and a quivering, luxuriant, ice cream-like head, there is a certain sense of cognitive dissonance.

Until the moment of revelation when you understand that they are obviously doing something clever with the name and this was all on purpose.

For a beer that is so visually striking, so vivid in its colour, its scent is remarkably subdued.

Damp cereal grain and a waft of hot cross bun.

There’s an instant hit of sweetness as you begin to drink: intensely caramel at first, then Victoria sponge as jammy, cake-like flavours develop.

Custard, icing sugar and raspberry are all referenced somewhere in there too.

I don’t think I’ve ever encountered a beer that has so much complexity at the sweeter end of the scale.

Eventually, a gentle Satsuma bitterness emerges – just enough to make sure it never gets anywhere near cloying and forcing you to dive back in for more.

The Bishops Arms (sic – and that missing apostrophe actually makes me feel a little bit sick) is a chain of pubs in Sweden. 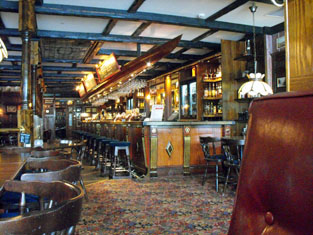 And they are most definitely pubs as you and I understand them. If you are from where I am from that is.

The decor in the Malmö, Gustav Adolf Square branch is very much based on the British pub, but it’s tastefully done. This is no theme park.

Except there are pictures of the UK’s constitutional monarch fucking everywhere.

If this was Britain, it would be a Loyalist pub – the sort where you’d get glassed if you didn’t cheers Her Majesty.

Any points this place lost based on that bit of oddness are won back by what is a mind-blowing selection of quality beer.

The bottle list is almost beyond comprehension. USA, Belgium, UK, Scandinavia all covered to a ridiculous extent.

Seriously, it makes some ‘craft beer bars’ in London look like a fucking joke.

There’s approximately thirty taps along the bar, weighted towards keg – though some of those are given over to the likes of Carlsberg and Staropramen.

The whisky list is also nuts, and there’s some kind of limited edition cask sitting at one end of the bar. I wish I was into whisky. It just hasn’t happened for me.

Even when confronted with an overwhelming, enticing beer list, I think it’s important to go local and go draught.

Because despite the scarcity of some of the other beers on the menu, you know that the local beers out of those taps should be at the peak of their powers – the best you will ever have them.

I’d seen Svaneke beers knocking about in Copenhagen, but I hadn’t got involved due to the tidal wave of incredible beer that washed over me there.

Maybe I should have gone Swedish first – don’t want to get into geo-politics here – but In Your Pale Face IPA’s bizarre hand-drawn / Word Art pump clip mash up immediately caught my eye.

I’d also done a bit of reading around the brewery; its location fascinated me.

It seemed outsider, isolationist, at the edge of various worlds. I want to visit.

Swedish people told me it’s where they went to ride their bikes on school trips. Don’t shatter my dreams Swedish people, I’m not listening.

Regardless of quaint reality, the fact that a brewery as removed from cosmopolitan cool – geographically-speaking – as Svaneke Bryghus is can produce a beer of such innovative individuality and quality fills me with such incredulous glee that I almost break down and weep.

The 89 krona I’ve been charged for the privilege seems cheap.