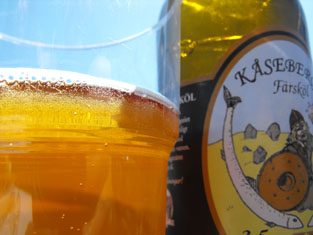 'Färsköl' literally translates as 'fresh beer'. I'm not clear what the British equivalent of that is.

There's some chat on the label about Reinheitsgebot. I've no idea why.

I'm sure this beer would look unimpressive hidden away in a dark corner of a shabby pub, but outside in the blazing sunlight it shimmers and sparkles, with flashes of dynamic yellow and vivacious golden orange dancing across its translucent body.

It's difficult to accurately identify what it smells like – the overpowering whiff of saltiness from the sea that's less than a metre away won't allow that – but a slight honey sweetness is detectable.

It could well smell of salt and fish too. I kinda hope it does for authenticity's sake.

That salt-obscured sweet aroma is carried through to the flavour. It's slightly cloying and there's not much else going on.

Kåseberga is a tiny little village (no, I don't know the Swedish for village – see earlier journalism comment) in Skåne, not far from Ystad. 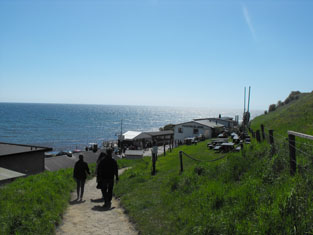 The cluster of  buildings nestle just down the hill from the utterly epic Ale's Stones. If you are into megalithic monuments – which I most certainly am – I suggest a visit.

It's not just the stones themselves that are impressive – their jaw-dropping, imperious position looking out across the Baltic Sea demands contemplation and reverence.

This kind of match is easy

It's intuitive. It's because I'm on holiday.

Pretty much everyone does it to some extent.

The quality of the beer doesn't really matter in these situations.

It's why Mythos only tastes good in Greece.

I'm in Sweden in May and it is incredibly sunny.

So sunny I get sunburnt, but I think I am the only man alive who can achieve this state of being in Sweden in May.

After being completely awestruck by the majesty of Ales stenar, and the intensity of the contrast between the deep blue of the Baltic and the plush greens and rapeseed-yellows of the Skåne countryside, we wander down a steep path to a seafront fish bar.

I try to hide my excitement when I see they sell a beer unique to this setting.

We eat what is undoubtedly the freshest, tastiest salmon I have ever consumed at a table by the water.

The slightly suspect sweetness of the beer actually compliments the saltiness of the fish, and I dream of it being being brewed by a retired fisherman in the village behind us.

If I ever drink this beer again I hope it evokes the sense of calm and blissful peace I feel as I listen to the waves gently lapping against the coastline.