I should have sat on this longer.

But how many beers – if you understand the inherent risks of bottling beer – can really be kept for any period of time?

That there is my excuse for cracking this open nine months from purchase. 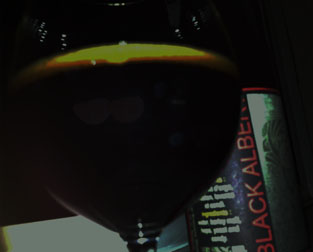 The most striking thing about Black Albert’s appearance is its head: thin, so removed from white it’s almost red and the slightest hand-twitch introducing a quicksand lacing,

Port, brandy, Baileys – smells of something more alcoholic than beer. Though coffee too, to the extent I’m slightly confused about what time it is.

It’s definitely somewhere between 2am and 6am.

I’m a bit fed up of applauding Belgian beers for hiding high alcohol volumes, but even relatively young, this beer buries 13% so deep it’s beyond comprehension.

There is no flavour spike. No brutal booze beatdown.

If you were to twist my arm to force specificity, I’d allude to toffee and vanilla, and yes, a burnt wine, brandy vibe.

I’d rather you didn’t get physical though. I’m pretty fucking chilled out right now.

As in contemporary RnB.

Not in any kind of ironic white middle-class way. Just pure dig it.

I could write essays about the critical paradigm shifts in RnB since the mid 90s.

I could reveal to you the intricate subtleties of a single R Kelly song in a way that would melt your mind.

But I’ve always thirsted for RnB to do something more.

Always felt there was rich unexplored territory here, an opportunity to uncover something more about modern, urban life that wasn’t, well, so shiny and polished.

Usher’s Climax touched on it.

The Weeknd pretty much got there.

But this, this is something different.

Frank Ocean’s Nostalgia, Ultra mixtape promised much – Novacane is in my eyes one of the best songs to emerge in any genre over the last five years – however it felt a little disjointed, but then I guess that’s why it was a mixtape.

Channel Orange is a different proposition. 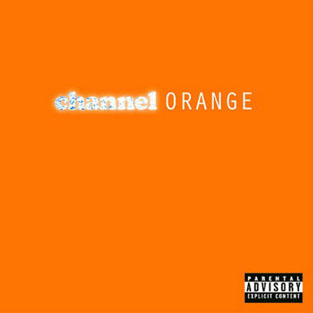 I’m not going to review it here, give you a potted history of Frank Ocean or otherwise do what a thousand music journos will do.

I will simply explain my reaction.

Sometimes I hear music that tonally and compositionally instantly connects with me.

I fear this music. I am suspicious of it.

Nothing should be that easy.

Usually, eventually, I come around to loving what my gut instinct told me I should.

Not with Channel Orange.

From the moment the strings kicked off Thinkin Bout You I knew this was it.

This is what I’d been waiting for. A thirst satiated. A hunger satisfied.

I keep getting stuck on moments on the album, but the nine-minute-plus pinnacle Pyramids expresses precisely what it is I love about this album – I have listened to it on loop for literally hours.

Particularly the section from 4.26 onwards.

Got my incredulous face on.

This match is about potential.

And how satisfying it is when someone or something fulfils it.

Frank Ocean has not just fulfilled it, he’s surpassed it by light years.

What I love about what he’s done is the ambition that he’s expressed.

It’s gone beyond what I could conceive. This is a key moment in 21st century music for me.

That same insatiable thirst I have for RnB to do something exceptional exists in my appreciation of beer.

I hear whispers on the wind that some people consider De Struise to have something of the The Emperor's New Clothes about them.

Those people have clearly never sampled Pannepot or Black Albert. And are idiots.

I knew Pannepot was good,

I had no idea Black Albert was so deserving of the beer geek hype that surrounds it.

I could drink it every day and ruin my life.

It fulfils its potential.

As good as it is, it’s not the moment for beer.

When will it come? Or have I missed it?