There is an intense darkness about Life & Limb, but one that stops just short of black. Clarity exists here too, but it is a solid, impenetrable, polished sheen rather than anything to do with translucence.

It doesn’t seem possible that any light could come from something so impassable, but bubbling beige froth is summoned somewhere from its depths.

Leaning in closer, vanilla pod scents and booze vapours evoke blurred memories of something I can’t quite make out in my mind’s eye.

Probably for the best.

An indistinct citrus swirl emerges, akin to a section of the aroma you get from a coffee they call bright.

Damp wood chip too, like walking through a forest in the rain.

I steel myself for a brutal alcohol mouth burn, but it never comes.

Instead there’s a caress of caramel sweetness.

I detect a dash of lime, feeling happy about the connection between smell and flavour.

A more overt presence is maple syrup, and it works brilliantly. No gimmicks here.

I sense an underlying theme of wood in this beer that I hope hasn’t been planted in my mind by the label.

I walked into this beer having not read anything about it. I leave it feeling informed about its greatness.

There were two clear camps during Euro 2012: those who were irritated by its presence (posh people and nerds) and those who are suffering from a savage comedown now it’s over, falling forever down a pit of infinite despair, simply going through the motions of life like everything is okay when it’s definitely not, asking why the universe would show you something so incomprehensibly beautiful and then rip it from your grasp (me). 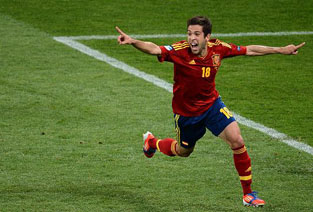 I think it was one of the best international tournaments in my lifetime. It’s up there for me with Italia 90 and USA 94.

But maybe that’s because the 2010 World Cup was such a damp squib. This was just contrast

Maybe there could have been more goals, but I can forgo the need for net busters when a tournament produces as many moments that will be forever imprinted on football history, that will be talked about when I am an old man, as this one did.

Carroll’s brutal elegance reminding everyone that old fashioned English centre forward play still has a place in the modern game.

Spain cementing their place as the undisputed best international team of all time, laughing in the face of the ‘boring’ haters.

Keane being as psychotic as a pundit as he ever was as a player (though ITV coverage can generally suck out).

I could have undertaken some cheesy as fuck beer and, er, match matching throughout this tournament.

"Ooh, I’m watching Italy versus Germany, why don’t I have an Italian beer then a German beer?!?!?"

Get the fuck away from me.

That shit is so forced.

And deeply unlikely to bring about any truly great beer moment.

I decided early on I was just going to drink good beer throughout the tournament, with no thought to how it related to the game I was watching.

Nods must be given to some other standouts –Brasserie de Jandrain-Jandrenouille V Cense and Duvel Tripel Hop 2010 in particular – but Life & Limb is the beer that I will forever associate with Euro 2012.

Because in the moment I was drinking it, watching the England-Sweden game, I felt like I was 9 years old again.

Albeit with beer replacing Ribena and slight inebriation supplanting a sugar high.

How long till the Olympics again?