The United Nations Single Hop Showcase Educational Programme (UNSHSEP), mandated at the 2005 World Summit, has only really begun to gain traction among member states over the last few years.

The UK is a global leader in the activation of the Programme, with both relatively new market entrants and established players now supporting the initiative.

While I applaud the sentiment of the Programme – to educate the world's palate and champion the hop crop – I can't help but feel divided by its outcomes.

I struggle to remember the last time I went to an Indian restaurant and asked for a single spice jalfrezi.


My hope is that this analogy resonates and I don't have to try and pretend I have a clue about what I'm talking about.


Just nod, in a kind of knowing way, and pretend you're on my wavelength.


Maybe tap your temple with your finger. The one you point with. Finger, not temple. 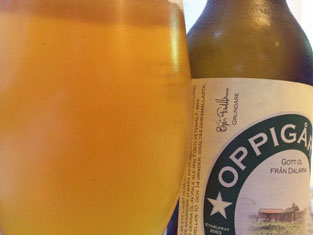 A block of unremarkable (to these jaded eyes) pale orange, it's difficult to know what to expect.

Well, that is unless you've done the obvious thing – which is to read the label and find out what the single hop is.

The discovery that it's Styrian Goldings is a little disarming.

That's not very rock and roll now is it? That's not what the young people are into nowadays, what with all their Walkymans and their X-Station 2s, is it eh?

Any thoughts of tedium are instantly dissipated the moment you realise you're sniffing an apple crumble straight from the oven.

Any assumptions of banality are smashed into microscopic pieces when those aromas are carried through into the flavour and balanced outrageously well by a squeeze of lemon juice.


Makes sense – this beer was inspired by a visit to England.

Places occupy as much mind space as they do physical.

What I mean by this is this: your conception of, and connection to, a place is as important as its actual existence in the world.

Actually what I mean is my conception of, and connection to, a place is as important to me as its actual existence in the world.


I engage with spaces – from the vastness of mountain ranges to intimate corners of rooms – in a way I don't really understand, but that I know is distinct and different from the way I comprehend other stuff in the universe.

I'm increasingly bewildered by the unique circumstances that take me to places that would probably not even make the wishlist of a seasoned traveller.

Without wanting to do it a disservice, Lund is one of those places. 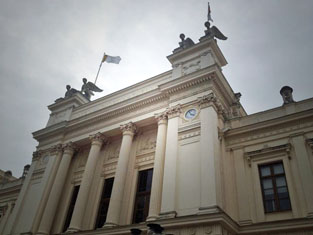 Stars have aligned to bring me to this small university city in southern Sweden.

And I'm glad they did, because it's undoubtedly both charming and sophisticated – a bit like a Scandi Cambridge, albeit on a much smaller scale.

Also, The Bishops Arms has a branch here.

This post is as much about the Swedish beer scene as it is about Oppigårds Single Hop Ale and Lund.

The reason that I've pulled out this particular match is simply that this was the stand out beer on my trip, and it was purchased from the Systembolaget in Lund – an outlet that combined an exceptional selection of Swedish craft beer with attentive, knowledgeable customer service.

Reykjavik's Vínbúð has a lot to learn.

I guess it's against this backdrop of state alcohol regulation that I want to applaud Sweden's thriving, vibrant beer scene.

It gives me hope that whatever the beer duty escalator throws at us here in the UK, good beer will out.