Heineken and the London 2012 Olympics

Do you remember when Heineken withdrew its lower-ABV ‘cold-filtered’ version from the UK and replaced it with the 5% version? 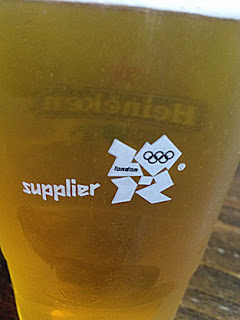 I do, as I can remember thinking ‘finally, we can get as hammered as the mainland Europeans do on this shit’.

Which is a weird thing to think. If you think about it.

Anyway, I can remember banging a lot of it. Or can’t, if you catch my drift.

Drunk out of a plastic cup it tastes much as it always has: nondescript, but better than Stella, in the way that Shania Twain is ‘better’ than Celine Dion.

I love all sport me – increasingly more as a spectator than a participant – so when the world’s grandest sporting event took place a few miles from my house, featuring a load of sports I never get to see because they’re obscure and weird, I got excited.

I went to the boxing on the first day. It was awesome.

I’ve found myself saying awesome quite a lot recently.

I think it’s a self-loathing thing. The more I say it without being truly awestruck, the more I hate myself, the more I chip away at the baggage of the ego and a misguided sense of self.

My seats for the water polo on the last day were so good I almost fell out of my chair and into the pool.

But the event that really captured my imagination was a preliminary round of the weightlifting. 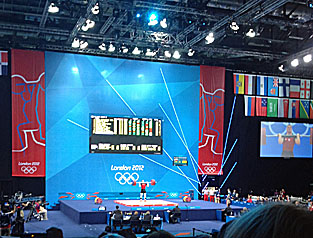 I had nothing to do on a Saturday.

Partner in crime otherwise engaged, brothers in arms called away on alternative missions.

So on the Friday night I relentlessly pursued the goal of a last minute Olympic ticket.

Despondency was the order of the evening, until, at the 11th hour, I secured the all important golden ticket to Willy Wonka’s yard.

Got to the ExCel around lunchtime. Drank a pint of Heineken. £4.60.

Bit bored. Have a sandwich. Drink a pint of Heineken.

More waiting. Have a pint of Heineken. And better get one to have in the arena.

Seats are good. I have the warm glow.

I witness an incredible two hours of human endeavour.

The crowd are unbelievably enthusiastic and support every single athlete in a way that utterly transcends the usual sectarianism in sport.

One dude, I think he may have been Finnish (proper sports journalism right here), fails his first two attempts at a clean and jerk lift that is way off the heaviest weight being lifted.

Even if he is successful, his Olympics ends here and now.

As he comes out for his third attempt the crowd roar louder than they have for the British athlete competing.

The arena is drenched in emotion. The noise lasts longer than it should. I can feel the force of gravity crushing me as chalked hands find their place on the bar.

The weight rests under the Scandinavian’s chin. I would love to delve into his mind at this point to understand the internal conversations.

Then without warning the snap into the jerk.

His knees look like they will buckle. His arms tremble uncontrollably.

The crowd draws a collective breath, then explodes as one.

The weightlifter straightens himself and stares into the middle distance.

Atlas taking his punishment in defiance of the gods.

Do I care that I’m drinking Heineken? Not really.

If you were expecting some commentary on the monopoly of sponsors and how awful it is that you could only drink Heineken at Olympic venues I’m really sorry.