For some reason, in the context of beer, that seems an important point.

But Blanche des Honnelles is the first of their beers that has inspired me to put finger to keyboard. 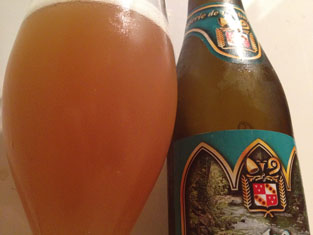 Some beers interact with light in such a way that you can lose yourself in a spectrum of colours (okay, a spectrum of orangey browns).

This beer, however, has an impenetrable orange solidity.

Have you ever frozen banana slices?

If not, you may not recognise the aroma this beer gives off.

Though you may recognise the whiff of booze, which is a bit odd given its 6% ABV.

I’m no wit connoisseur, but when a wit is right it refreshes the body, soul and mind in a way few other beers can.

This, this is right.

I’m not really sure how a beer can be ‘clean’, but there is no other word available in the English language that so succinctly describes the first time your mouth is introduced to Blanche des Honnelles.

If that was all there was, I’d be happy enough.

So when further complexity begins to emerge like a piece of paper unfolding for eternity my brain feels like it may pop.

Herbs and spices from every corner of the world wink at you from parallel universes as you are pulled into an infinite cosmic spiral.

Then something like blood – iron and raw meat – reminds you of your own physiology.

A hint of honey sweetness in the death throes calms the nerves and returns you to earth.

The Great British Beer Festival took place a month ago. 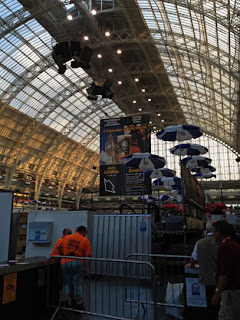 I am only writing about it now, its status as anything approaching a hot topic a distant memory for most.

I suggest there are two possible reasons for this delayed reaction: a) that I am lazy or b) that there has been so much other stuff going on in my life that I have been physically and psychologically unable to devote the time and mindspace to even contemplate writing about it since my attendance.

In reality, it’s a bit of both, but I would be more comfortable if you went with the latter.

Certainly a lack of time and escalating stress levels hampered my ability to really engage with the event.

I went on the Friday with a few vague acquaintances who don’t know I write this stuff and only attend the event to get blind drunk and shout.

However, if any of you blind drunk shouters happen to stumble across this, please don’t assume I think there’s anything wrong with that.

As soon as I enter I am struck by how much better Olympia is than Earls Court. Oooh, look! Sunlight!! Actual architectural character!!!

As soon as I enter I know I am not in the right place mentally to endure this for more than a couple of hours.

I’m not sure why I didn’t connect with GBBF this year. I feel like a Grinch.

A load of bars serving mediocre beers from around the country.

A German/Czech bar that had run out of anything I was excited about.

A US bar serving high-strength, heavily-hopped IPAs out of casks.

I considered just ploughing through some bottles, but then realised I could actually just drink them at home without being surrounded by cunts in novelty hats and therefore have a much better time.

So I bought every Deschutes and Epic beer available and headed toward the exit.

I stopped off at the Belgian/Italian/Other bar to have one for the road. And I’m so glad I did.

Blanche des Honnelles cut through my disillusionment like a claymore to the neck.

Instead I just purchased a few bottles of Blanche des Honnelles and left.