If you have ever visited, or happened to live in, Greece, I’d hazard a guess that you may have encountered Mythos. 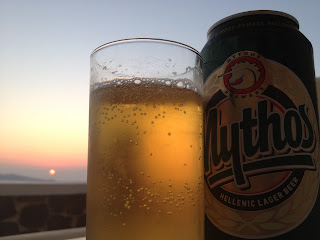 If you've ever described a beer’s colour as ‘straw’ and felt that people just weren’t getting it, I’d suggest keeping some Mythos in the house as a visual aid.

In fact, if you do have some straw, throw it in the faces of the people you’re talking to.

This act of physical theatre, breaking down the barriers between audience and performer, will be a perfect representation of what it’s like to drink Mythos.

Hopefully, some will have got a bit of debris in their mouth to make the experience complete.

What I'm trying to say is that Mythos definitely has something of the cereal crop about it in appearance, odour and taste.

Santorini is impractical for human habitation.

Essentially, the island is the crater edge of a civilisation-ending (allegedly – don’t want to get sued by geology) volcano.

A volcano that is still active.

From its highest heights, the island slopes down almost vertically before plunging into the deep oceanic lagoon formed by a cataclysmic eruption over 3000 years ago.

Most of the settlements on the island nestle precariously atop exposed ridges, snatching at the small pieces of land that allow for development perched high above the sea.

Maybe its height and position in the Aegean made it important, from a military and trade perspective, but I’d like to think there is another reason for Santorini’s early (and continued) residence: it is incredibly beautiful.

I use neither of those words lightly, but I may have slightly misused them.

It is what Santorini looks upon that makes it beautiful.

The sun, the ocean, the rock. 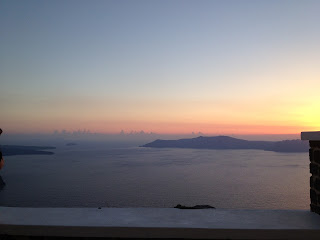 Whoever it was that first washed up against the steep cliffs of Santorini must have ascended to the top and witnessed the golden dazzling orb dipping into the obsidian depths as I did night after night.

There is no practical inconvenience so great that it would make you leave this place.

The holiday beer is not a new concept.

Among those who appreciate exceptional beer it reserves a special place in the heart.

Special because it transcends appearance, odour and taste.  It is almost inevitably not very good when measured against these criteria.

A bottle of Mythos to me represents glorious heat, relaxation and tranquillity. The effect of drinking it is almost meditative.

And so it was this time.

You see this holiday – which was in fact more than a holiday, it was my honeymoon (sorry ladies) – I had resolved to do nothing but relax, listen to music, eat and drink beer.

I'm quite a catch.

The first few glasses of Mythos did everything they were supposed to do.

A few days in, however, I was not entirely content.

Though I would have happily drunk Mythos till it seeped out of my ears (again, I'm quite a catch), I could not quite shake off the beer geek dwelling in the cave of my mind.

So when I discovered the beers of Santorini Brewing Company being sold not too far from my luxury abode, I felt complete.

It’s impossible for me to really critically appraise these local craft beers given the situation, but they were an absolute revelation to me at the time.

And even though it’s hard to separate the beer from how happy I was, the Crazy Donkey was definitely pretty cool.

In fact, here’s a photo to reiterate whatever point it is I'm trying to make. 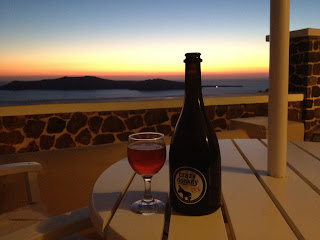 Weirdly, I was in Camden Town Brewery’s walk-in fridge this weekend and spotted Crazy Donkey and Red Donkey sitting on a shelf.

I'm assuming that this is the universe telling me something.
Posted by Chris at 11:41 pm